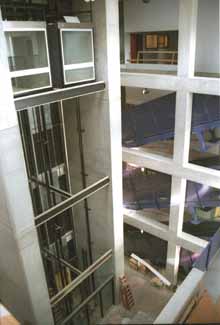 Architects, artists and scientists united to design the new Natural Science Building. The designers of the building noticeably kept Northern Kentucky University’s trademark concrete exterior, but to gave it a unique edge, added aluminum to parts of the building.

The idea was to remain consistent to the overall design of the campus, while trying to make it as unique as possible, said Omni architect’s project manager Eric Zabilka. The campus’ geometric concrete design known as “brutalism” was popular for civic projects in the 1960s but went out of vogue thereafter.

The concrete helps make a building sturdy, he said but made it harder to make it look modern. One of the goals of the building design was to make it seem less imposing than some of the other block-shaped, concrete buildings on campus like the Old Science Building. To do this, Zabilka said they made the edges more round and substituted aluminum for concrete in some of the areas.

The architects also put in subtle symbols of the scientific world into its structure. In the east stairwell, the windows are situated to represent what were believed in ancient Greece to be three of the four elements of the universe; earth, air and fire. The other element, water, is not represented. One window faces the ground, representing earth, a second faces horizontally looking out at the rising sun, representing fire and a final one faces upward toward the sky, representing air. The builders also installed skylights in the main Atrium to represent a sequence of numbers commonly found in nature. In the Atrium, which houses the elevator and connects the two wings of the building, 19 skylights are arranged in accordance with the Fibonacci sequence of one, two, three, five and eight.

“One of our design goals was to imbed the concepts of science into the building,” Zablika said. “We looked at the underlying meaning of science.”

The scientifically-based artwork of NKU art professor Ana England will also be displayed throughout the building.

England’s 14 pieces made of black and clear glass are all centered around an aspect of science. One piece shows water molecules evaporating, while another compromises two floors that takes the viewer from the center of the earth to the stratosphere. This art piece can only be fully viewed by taking the elevator from the second to the third floor.

England said she was thrilled to create art for a science building because scientific themes always inspired her. Her dad was a physicist at the Los Alamos government research facility in New Mexico. Because of her interest in both the world of science and art, she said she is glad to see the new building incorporating both.

England spent a year and a half making the art for the building. She said she spent a majority of the time researching scientific information to accurately portray her pieces. Many of NKU’s faculty helped her in the process.

Since England’s pieces consist of transparent glass, good lighting will be required for the building.

The building design allows for much more natural light to fill in, said Mary Paula Schuh, director of campus planning. The lights used in the building also were creatively designed to avoid a standard florescent light appearance, Schuh said. There is also more of a use of drywall to break up the monotony of concrete walls on the inside.

“They spent more time to make it more inviting,” Schuh said. “More creative energy was put into the design of the building.”

Schuh said this is a departure from the old building.

“The old science building is pretty dark,” she said.