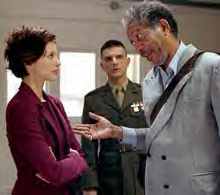 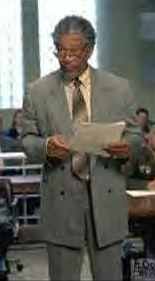 Ashley Judd and Morgan Freeman star together once again in a thrilling drama about a woman who defends her husband against charges of war crimes, along with the help of an eccentric ex-JAG lawyer.

Judd plays a lawyer whose husband is charged with war crimes including nine counts of murder. To complicate matters further, her husband, during his service in the military, used his real name, not the made up persona that she knows him by. She calls upon a lawyer, played by Freeman. After many roadblocks and threats upon the lives of those involved, this story comes to a shocking end.

Judd and Freeman are excellent together. Their characters are exact opposites and allow a kind of play and clash against one another in their styles. The plot leads the viewer and characters on a crazy search for truth similar to another military courtroom drama, A Few Good Men.

High Crimes is a movie that will keep the viewer wondering and guessing. This really is a “must see” movie.