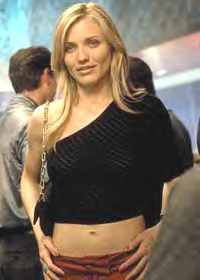 My fellow members of the male gender may shun me for saying this, but here it goes. I enjoyed Cameron Diaz’s new film, The Sweetest Thing. A little bit.

My female counterparts, however, probably won’t give me such a hard time for saying I enjoyed the movie. The for the most part, “chick flick”, follows a trio of heart-breaking player girls who get sick of the club scene and start their quest to find Mr. Right.

Diaz, who plays Christina, is the lead character who, along with her best friend (and roommate), chases her dream guys across state lines to a wedding that they aren’t invited to only to find out that Diaz’s dream guy, played by Thomas Jane, is the one about to get married.

Throughout the trip, the two are faced with numerous embarrassing situations. Scenes like a trip to a men’s public restroom, where Diaz winds up getting a shot to the eye from an unidentified male organ, and a stop at a backwoods clothing store prove to be some of the film’s funniest moments.

Christina Applegate, who plays Diaz’s best friend, gives Diaz plenty of opportunities to be the butt of her own jokes. Not unlike Diaz, she takes full advantage of these opportunities. This movie, like Something About Mary, gives Diaz several chances at getting laughs by being an idiot. The unfortunate part of this movie is that Diaz often winds up coming across as an idiot, not a funny idiot like she has in her past films.

Most of Blair’s scenes were lacking substance, and humor. One scene where Blair has sex with her boyfriend while he is dressed in a large, furry elephant suit proves to be not only unfunny, but a bit hard to stomach. Another scene, that appeared to uncannily resemble a scene from Something About Mary, shows Blair being helped by paramedics after her mouth gets stuck on a certain pierced male body part, after she performs a certain sexual favor. The scene, just like the one in Something About Mary, ends with every paramedic, fireman, cop and local in neighborhood in the room watching Blair in her most embarrassing moment. If it sounds like something you have seen, it is because you have.

While the movie, in the end, proves to be another sappy love story, the sporadic scenes of gross out humor and cheap jokes do, at the very least, make the movie bearable. Though the jokes are unoriginal and often not funny, some of them do work. A few of them are downright hilarious. One scene where Blair is trying to get a stained dress to the cleaners after a one night stand and keeps running into everyone she knows turned out to be particularly funny. Another scene where Applegate and a guy in a dance club exchange pointless banter and flirting also turned out big laughs from the audience.

Casting females to play lead roles in a raunchy, gross-out humor flick was something new, which I liked. Men have ruled the genre of such comedy in flicks like National Lampoon’s Animal House, Dumb ‘ Dumber and more recent films like Road Trip and American Pie. Writer Nancy Pimental’s risk in writing a comedy like this for women was just that, a risk. The fortunate thing is that it worked, for the most part.

Diaz is the one who makes this film bearable. Her veteran experience as a comedic actor held this movie together when the plot failed to do so. Though Diaz appeared to have lost some of the comic genius that made her other films such hits, her comedic skill is evident in The Sweetest Thing. Diaz has a knack for comedy. At times, she even made her co-stars Applegate and Blair look funny, which they aren’t.

For those hard-core fans of the cleverly disgusting and well-written comedy, this film may not be for you. The film may make a better date movie. After all, it does have something for everyone; with scantily clad women prancing in their underwear for the men and a sappy love story for the women. The Sweetest Thing will not go down as a comedy classic, but it is worth your eight bucks.