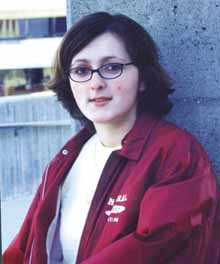 Having escaped her war-torn homeland former Yugoslavian Mirsada Kadiric is now vice president of the Marketing Club at NKU.

Northern Kentucky University student Mirsada Kadiric was nine years old when the Serbian army came and took her father away . They took him to a concentration camp along with other young , educated , Bosnian muslim men. She remembers that her mother, strong and tenacious, tried to comfort her. She recalls, ” It was raining. I was holding out my hand to my father and didn’t understand what was happening. My mother told me it was just a game and everything would be okay.”

Kadiric , now 20, goes to NKU with other Bosnians . One she met at the high school where she completed her education before college. The other was by chance. ” My mom and her mom worked together and started talking about their children, ” she explains . The connection to the two was then made. Kadiric is the vice president of the Marketing Club at NKU and maintains the Web site . ” Somehow a cousin, who we had lost, found the Web site and e-mailed me from there, ” Kadiric states with a smile. She says that she is happy to be alive and has grown very close to her mother . ” We are like sisters, ” she says, ” My mother is my best friend.”

The memories from her turbulent childhood are still vivid. Bosnia and Herzegovian declared self rule in Oct. of 1991 and it was followed by a vote for independence from former Yugoslavia in February of 1992. In 1992 , Americans saw a war on the television they didn’t quite understand. The Balkans and surrounding area had always been a powder keg for the rest of the world’s wars aside from beginning World War I . Milosevic had started ethnic cleansing front against Bosnian muslims. Bosnian Serbs were supported by neighboring Serbia which started three years of ethnic and civil conflict. Amongst a political agenda , innocent people suffered and died. Kadiric Kadiric is a part of this story.

” When the Serbian Army first came into Bosnia, they said they were here to protect us , ” she explains, ” Then they went house to house collecting guns from anyone that owed one.” The next time they came they took her father. Through the eyes of a nine year-old nor on the comfortable couches of our America , can we understand or begin to imagine such a reality. ” The next time they came they ordered us to sit in the living room as they took anything of value from our house, ” Kadiric states. Walking along the streets with her mother, she had seen people dead , half-dead lying in the streets of her town. ” I wanted to help them , ” Kadiric confesses, ” My mother told me we couldn’t help them and not to look at them. She was scared of what the army men would do.”

The last time the Serbs came to them they told them they had to leave their house. They burned it to the ground. They put her and her mother on a bus to a concentration camp. ” It was a room about the size of a big bathroom on campus, ” Kadiric illustrates, ” There were about 100 of us in there , women and children. ” Scared and uncertain of what was going on , Kadiric thanks her mother for protecting her, ” She hid me away from the soldiers. We were given no food and little water. My mother had a pack of cookies and gave me one a day. She told me to be quiet. I played with a girl I had gone to school with . I didn’t understand why this was happening,” she continues, ” I wouldn’t have survived without my mother.”

In the middle of the night , Kadiric remembers hearing women scream as they were taken away by the soldiers. They were often times raped, beaten , or killed depending on the will of their captors. Kadiric estimates this was the fate of 10-15 women per night.

After days of imprisonment, the Serbian army packed 200 or so of them into trucks to make way for new prisoners. ” They took us to neighboring Bosnian controlled city , ” Kadiric explains with a calm sadness, ” My uncle who lived in Slovinia found us there. We bribed a taxi driver to sneak us into Slovinia where I almost died from malnutrition.”

They didn’t know the whereabouts of other family members . They had no word of her father. Sadly, a male relative, who had been at a concentration camp said that he had seen her father die. There were no documentation present on most prisoners of these camps and it is uncertain the fate of many like Kadiric’s father.

Kadiric and her mother lived in Slovinia for a year then moved to Switzerland. ” Switzerland was accepting refugees as was many countries in Europe during this time, ” Kadiric explains, ” I had two uncles who had been living there for awhile , My grandparents lived there as well. ” While in Switzerland , they lived in a furnished apartment , funded by the government and she attended school. She learned German , French , and English. She made friends during her six year stay there. She comments, ” Switzerland had signed a six year contract with Bosnia to house refugees and then send them back , ” Kadiric continues, ” That was hard for me. To leave my family and friends once again. I questioned many things during this time . I was angry, but my mother was a strong woman who kept me going . I would be depressed and she was my strength.” Her mother, 42 now, was 30 at the beginning of this conflict. ” I didn’t know when I would see them again. We weren’t going back to Bosnia, ” Kadiric explains, ” We flew to the U.S. . My mother had friends here.”

Being refugees , Kadiric and her mother didn’t get to choose where they would live. ” We had to have someone sponsor us , find an apartment for us ,” she said, ” My mother knew people here in Cincinnati.”

Talking about the adjustments to America , she admits that it has been hard. America is more fast paced. People don’t have time for life. ” It was unheard of for a high school student to be working , ” Kadiric illustrates, ” I had three meals a day with my family. You would spend time with your family,” The personality of Americans is questionable , especially to many foreigners these days but the wisdom Kadiric would like to pass on to her friends and future children is , “…know about the world. Learn to respect and judge people as individuals . Don’t judge people for what one persons does or did.” Kadiric Kadiric is a survivor. She speaks several different languages and is fluent in English. She has moved from many places as a refugee , as a student. She maintains a passionate attitude towards life. She has excelled under traumatic situations and has taken strength as alternative to hate.

There is a saying that her mother taught her to give her strength through their harsh times . Although more pleasant sounding in her native language , translating she states it as, ” I can because I want to .”

Ten years after her escape, Kadiric will go back to Bosnia this summer.Although she has no family left there and the house she lived in is gone, she wants closure.