State of Emergency not as exciting as it sounds 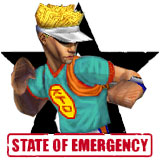 The concept of the game is good, but the way it is used is not very exciting. The main goal of the game is to bring down the evil Corporation, as well as fighting off members of rival gangs. The game itself is one big riot in the city that it takes place in. You have numerous missions to complete, before you can move on to the next level. The missions are the worst aspect of the game, and quite possibly the most frustrating thing I have ever done. Some of the missions are easy to complete, but others you must do over and over and over, I think you get the point.

The game play turns monotonous very quickly, with no hope of ever recovering. Thought the game you seem to be doing the same thing again and again. Whether it’s blowing up this store, or escorting this guy to that place, it became a real big pain in the ‘.

However, this game isn’t all bad. There is one mode of play that almost saves this game, and that is the Kaos mode. In this mode you have a set time in which you have to score a certain amount of points to get more characters and advance to the other stages. This game could have been much better, I guess Rockstar spoiled gamers with GTA3, so I definitely expected a lot more out of this game.

Final Score: 5/10 The mission system and not living up to expectations gives this game a low score. On the other hand the frustration level of this game scores an 11/10.