These three students from Ghana perform a traditional dance from their home country at the International Student Union Potluck dinner last Saturday. The Potluck featured student performances from around the world an array of ethnic foods. From left 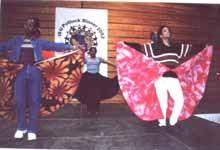 Graduate student Eleanor Wells from Trinidad and Tobago rehearses for a performance at the Potluck dinner. Student Joy Amekpor accompanies her in the background.

From all corners of the globe, people come to Northern Kentucky to get a degree. Of Northern Kentucky University’s 12,000 plus students, recent information from the Office of International Student Affairs show over 70 different countries are represented in the student body. Over 300 international students attend NKU. Other than the United States, the two countries with the highest representation on campus are Zimbabwe and Japan with 25 students. India isn’t too far behind with 24 students.

The question lingers as to why NKU attracts people from so many different countries. Jorge Marcano , from Venezuela, said the atmosphere of the campus could be one reason. ” It’s cozy. It’s not too intimidating of a university,” he said.

Marcano has been attending NKU since 1998 and said much has changed.

“NKU has improved a lot since then.. People are more knowledgeable of the world community,” he said.

When asked why NKU instead of some of the bigger universities in one of our major cities , Marcano says, ” I wanted the all-American experience . Here I knew I would be in the heart of it. So much of Venezuela is influenced by America . It’s practical and modern.” When Jorge first came here he experienced some cultural differences.

” I didn’t understand how Amercians attached so much importance on race when slavery has been over with for 200 years,” Marcano said. “This is 2002. I now have a better understanding since the racial riots in downtown Cincinnati.”

Chana Panyong, from Bangkok, Thailand, has been here three semesters. Panyong says that he looked at many universities but settled on NKU . “Tuition was cheap and NKU has a good size. Not too big and not too small,” Chanathip said. When asked what he would like to see improve on campus he simply says, ” More trees. Bigger dorms. On the weekend, campus life is dead. Nothing is going on here. Something needs to be done to bring campus back to life.”

Burhan Mohamedali from Tanzania, who actively participates in SGA and the International Student Union, claims that location wasn’t important when coming to the U.S. “NKU is isolated enough in the country but it is close to the city,” he said. Mohamedali looked into various universities like UH of Texas, Murray State, and said NKU was the fastest at processing him. ” One thing I would like to see change; there should be an international scholarship fund . SGA supports it but administration doesn’t have the money,” he said. ” Funds would help international students and would be a good marketing tool for the university.”

NKU is close enough for Afshan Khokhar to live conveniently with her parents. Afshan, from Multan, Pakistan, said, ” I like the scheduling . Classes are short and I am not far from home. My parents care for me and want me to be close to home since I am a young Muslim girl. I care for them and know that their decision is for my higher good,” she said. Khokhar has been attending since 2000 and says the cultural diversity of NKU has given her a positive exposure to other countries. As of yet she is undeclared, but looks to a degree concentrating in optometry.

For some such as Eleanor Wells of Trinidad, Tobago, it was a change of environment. Wells came from North Carolina and has a degree in accounting. She is now currently finishing a degree in information systems. Eleanor has been at NKU for a year and half and looks to get a job here in the states.

One would almost have to be deaf not to hear the numerous languages being spoken on campus. With students from Nigeria, Germany, the Philippines and many others, American students are not only exposed to the international community but experience it in a personal manner.

NKU ‘s tuition rates seem to be the most amicable attraction to students from across the world . The modest cost allows a rich diversity on campus . Economically and socially, students get a priceless learning experience colored with the cultures and dialogues of the world.