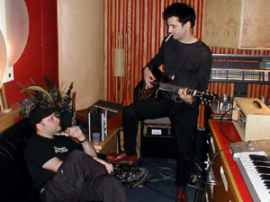 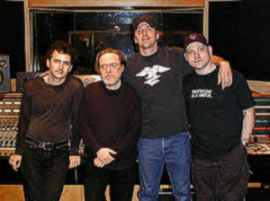 Members of the Ramones, along with some of their friends, are throwing a party in honor of Joey Ramone on May 19 to celebrate what would have been his 51st birthday at the legendary New York club CBGB.

This year, however, there is a twist to the party that separates it from last year’s, as well as those that Joey threw for himself in the past. The remaining Ramones are holding a contest in which the winning band will appear on a seven-inch record as the b-side to a song dedicated to Joey Ramone and performed by his ‘?musical family’.

The song, entitled ‘?Bowery Electric,’ was actually not written by a Ramone, but was written by Jed Davis from the New York City band Collider. Jed, along with the help of Tommy, Marky and CJ Ramone as well as Daniel Rey, recorded the song in March as a tribute to a person that had always been a friend and musical inspiration to them. According to Ramones Creative Director Arturo Vega, ‘?The song existed first. The power of this song made it possible for all these Ramones to get together and pay tribute.’

To be a part of the party, billed as The Bowery Electric Festival, participating bands must send a demo of an original song in honor of Joey or the Ramones to Ramones 1234, Arturo Vega, Joey Ramone Place, 6 East 2nd St. New York, NY 10003.

Several bands will be invited to play their song and a brief set at the festival. A panel of judges will then pick a final band to be included on the b-side of the single.

Other performers already scheduled to play at the festival include CJ Ramone and BeBe Buell, according to collider.com. The festival also includes an art exhibit for those fans who find their creativity in a paintbrush rather than a guitar chord. Anyone wishing to have his or her artwork displayed alongside Dee Dee Ramone’s cover for the seven-inch single can also send it to the above address. For those who just want to have a good time and celebrate Joey’s memory, there is room for them too, says Vega