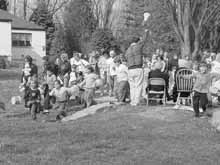 Kids charge the hill in search of eggs and the treasure within.

The Edgewood, Ky. home of NKU student Cameron Cochran and his family was filled with 150 children and adults last Sunday for the 2nd Annual Egg Hunt on Janie’s Rabbit Hill. Over 100 guests arrived for the second hunt, and were able to enjoy the warmer afternoon weather while hunting for eggs, sipping lemonade, munching cookies and admiring decorative posters made by Caywood Elementary School students.

The Egg Hunt on Janie’s Rabbit Hill, now an annual event, is held by members of the advisory council for the Jane Martin Cochran Memorial Educational Fund, commonly known as “The Janie Fund.” The fund was established in 2001 to honor the memory of Jane Martin Cochran, a NKU alumna and member of the NKU Writing Project. The fund benefits Kenton County public school students.

Jane is the mother of Cameron , grew up in Edgewood and died of breast cancer in January 2001. She was a teacher in the Kenton County Public School District, a devoted mother and a friend to many. As a teacher, Jane worked hard to break down barriers that kept her students from learning. Whether a child needed dental work, a warm coat, a notebook or a hug, she found a way to fulfill each need. In her memory, the Janie Fund distributes grant money to each of the Kenton County public elementary schools to be used at the discretion of the school faculty for the purpose of directly helping the students. Scholarships are also awarded to high school students who have overcome challenges and difficulties and plan to attend college or technical school.

Cameron Cochran said the event was more for the children than to money for the Jane Cochran fund. The event netted only a small amount of money, he said.

“It was to help the kids have fun,” he said.

“It was to help the kids have fun

Organizers deemed the two sessions of this year’s Egg Hunt on Janie’s Rabbit Hill a great success. As the festivities began, Chris Cochran, husband of Jane Cochran, led the children in a repeat-after-me chant called, “Let’s go on an egg hunt!” Cochran then gave participants directions for the hunt, which was held in the field adjoining his yard. While waiting for the signal to begin hunting, one child proclaimed, “I see hundreds of eggs!” His buddy replied, “I see millions!”

While the children searched for eggs filled with candy, they also had to dodge volunteers from Dixie Heights High School armed with silly string. Dixie students were also “Egg Inspectors,” keeping order out on the hunting grounds.

The grand prize of the Egg Hunt was the “golden egg,” which was hidden inside one of the common plastic eggs. Kelsey Voskuhl, a fifth-grader at Caywood Elementary, found the golden egg at the first hunt. When asked how she did it, she replied, “I just took my time, I guess.” Mabry Seiter, a second-grade student at Caywood, found the golden egg at the 3:30 hunt. Her winning approach was similar to Voskuhl’s: “Someone hided (sic) the egg, and I found it.” Both Voskuhl and Seiter were awarded medals engraved with a rabbit and the inscription, “Janie Fund Egg Hunt 2002.”

Gathering the children after the egg hunt, Cochran awarded the medals and announced the winner of the Jelly Bean Guess. The first session saw Shahana Reese, a fifthgrade student at Caywood, receive the prize for her guess of 1020 jelly beans. Brent Noble, 6,also a student at Caywood, won the second contest. Reese and Noble also received engraved medals.