Devil May Cry but should we care? 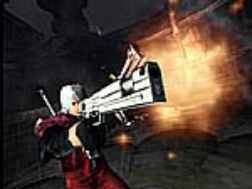 The creators of the Resident Evil series, Capcom, has done an almost perfect job at capturing the excitement, fluidity and intensity of the 2D action genre. These effects are reproduced in Devil May Cry. This is because of hordes of challenging enemies, excellent controls and a fast paced and deep combat system.

Controlling Dante (the half-demon main character) is seamless. It almost feels as if his movements are extensions of the person playing the game. Thus enabling no unnecessary effort in blasting and slashing enemies, countering attacks or dodging. All of Dante’s moves look stylish and well done, which immensely ups the entertainment value of DMC, whether watching or playing.

Capcom gave special powers to each of Dante’s forms, human and devil Dante (the alternate form). The special powers can be purchased with Red Orbs, which are earned by killing enemies, throughout the adventure.

Players are graded on chaining the various moves together for as long as possible, giving players an incentive to come up with cool looking combos. The combos go far beyond being a superficial feature. Because each enemy has its own strengths, weaknesses, and old school fighting patterns, players must learn what gun, sword and combo that exploits the enemy or boss. A result of this is the action remains fresh, exciting and appropriately challenging for the entire 15 hours of game play.

DMC is able to hold the interest with a variety of environments and game play mechanics. Such as fighting underwater, and in a blur affected area.

The only problem I see with the game is the need for a fully 3D camera, so battles are not fought off screen. But, this doesn’t hinder the overall experience all that much.

This game will, someday, be viewed a true classic. DMC’s game play and graphics are so excellent that it may even make the devil cry.

Final Score 10/10 This game manages to capture the player and engross it in the world of Devil May Cry. A must buy for PS2 owners.