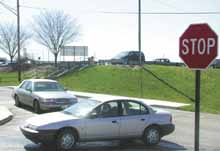 Getting pulled over by campus police for speeding may no longer end in a large fine or court date. At the beginning of this month, the Board of Regents passed a measure giving the Department of Public Safety officers the option of writing a campus citation in lieu of a state citation. A campus citation carries a smaller fine of $35 and does not add points to the driver’s license.

The smaller penalty will allow DPS to better enforce the traffic rules on campus, said DPS chief Jeff Butler, who proposed the change. He said many of the officers were reluctant to write people tickets for more minor offenses due to the severity of the punishment, which costs at least $76.50 for nine miles over the speed limit and adds points to the license.

“We can tell people what you are doing is dangerous, but we don’t have to cite them to state courts,” Butler said.

Whether an officer will issue a state citation or a campus citation is left up to that particular officer’s discretion, Butler said. He said the campus ticket is meant for minor offenses.

Just as the creation of the DPS cadet program increased the number of parking tickets, there will probably be an increase in traffic tickets with this new option, said Mike Baker, vice president of administrative affairs and chair of the transportation committee,which approved of the new tickets.

“We have been very aggressive,” Baker said.

Prior to the passage of the new tickets, DPS had written 71 traffic tickets for moving violations.

Baker said the cramped layout of the University makes it imperative that the traffic laws are enforced.

“We have a lot of pedestrian, vehicular conflict and we need ensure the safety of people on the campus,” Baker said. “”It is just the way our road system was designed. The main arteries cut through parking lots.”

The University will add revenue generated by the moving citations with that of the parking tickets to the funding of maintenance and repair of the parking lots. Baker said the object of the change wasn’t revenue, but safety, and he doesn’t anticipate it providing much income for the University. “It should help improve the parking situation for faculty and staff,” Baker said.

The new traffic ticket is a win-win proposal for both the University and the students, said Student Government Association president Katie Herschede. “Not only does it cut a break for the student, but it raises money for the school,” Herschede said.