Adventures from the Elite Eight 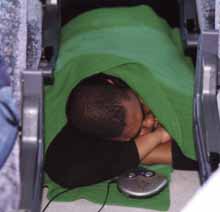 T.J. Roberson uses the floor of the bus as a bed during an 11 hour trip

I took an assignment to photograph the NKU Women’s Basketball games as they advanced through the NCAA Division II Elite Eight Tournament at Rochester, Minnesota. Finding out that the bus ride would be 11 to 12 hours long one-way, I figured doing a journal of this road trip would make for a good Northerner story. I was right. These are my observations and interactions on that road trip.

TUESDAY 5:45pm March 19. Rain. Rain, and more rain on the way. It would be good to escape this weather. I would be traveling with ten cheerleaders and their coach, Mickey Hill. Also on the trip would be fifteen band members and their director, Carol Dunavent. Basketball trainer, senior Jeremy Crigler and driving the Travel America bus would be Jim Ross, a regular with NKU road trips. When I boarded the bus, there were already a few band members claiming seats. I asked if I could sit in the back and was told that I could, but I might want to reconsider my seat selection, if I was going to study or sleep. The back of the bus would be noisy. I chose a seat in the middle. There I met Amy Webster, freshman cheerleader, who informed me that road trips are great. “All we do is eat,” she said. Sounded good to me, as I brought a few provisions also. The band members, as well as the cheerleaders, came well prepared, bringing pillows, cd players, teddy bears, books, magazines and a couple of coolers filled with soft drinks, water, and Cheese Whiz (more on this later). We left the campus at 6:15pm and a short time later the back of the bus, filled with most of the band members, broke into song. What they were singing didn’t matter, at least they were talented with their instruments. T.J. Roberson, sophomore trumpet player, saved the day by putting in a VHS tape of Aladdin. Yes, this bus had six TV monitors, three on each side. THE NORSE ARE COMING, THE NORSE ARE COMING… 8:47pm Quick! Run and Lock the Doors! It certainly looked like this was happening when our bus pulled into the McDonalds at Oakwood, Ill. From our vantage point on the bus, we could see three employees running from the front of the eatery to behind the counter and to the back of the building. Laughter broke out on the bus when we saw this. It turned out that they were going to close in 15 minutes and they were running back to turn on all of the equipment. Around 45 minutes later, and, after Mickey Hill sat with Ronald McDonald, we were moving again. Days Inn, Bloomington, Illinois 11:35pm CST We all went to our rooms. We needed to be on the bus at 8am the next day. We all needed a good night’s sleep. I know that I did. See the second part of Tim’s road diary , “Game Day” next week.

Wednesday 8:15am March 20. I felt that there was an air of anticipation with all of the travelers, as we headed down the highway even though the game was still 10 hours away. At 11:15am we entered the state of Wisconsin, soon after we could see some funny white substance on the ground. SNOW! This was a subtle reminder to us that winter is still very much alive in this state even though it has almost vanished in Kentucky. In the back of the bus, they were listening to various CDs of a humorous nature. They were laughing so loud that they woke up some of the female cheerleaders. Amy had told me that all they did was eat, however, from my vantage point it looked like a lot of sleeping was done also. Noontime at Denny’s. We ate lunch here. A few people engaged into some snowball throwing. At 12:56pm we were back on the bus watching a video of The Goonies. Somewhere along the way we crossed the state line into Minnesota. Along the highway near the town of Tomah, Minnesota there were quite a few interesting looking natural rock formations near the highway, too bad we couldn’t stop and check these sites out. Kahler Hotel, Rochester, Minnesota. We pulled in at 3:15pm and went to our rooms with the instructions that we needed to meet in the lobby at 5pm. We would then walk over to the Civic Center via a skywalk. That was nice considering that the temperature was 17 degrees F and a wind chill of 2 degrees F. The Civic Center was not as fancy as it was made out to be. From my point of view the lighting at one end of the court was not very good for photographing the game. The NCAA was not allowing any type of additional lighting. No Flash Photography. The Pep Band was located near our team’s bench, underneath the basket. NKU brought the maximum number of band members allowed by the NCAA, fifteen, plus the director. South Dakota State didn”t bring a band and the cheerleaders they brought were no where near the talent level of NKU’s cheerleaders. Of course then our Pep Band and our cheerleaders are a tough act to follow for any school. This wasn’t a putdown of their cheerleaders but an observation that I made. Gametime 6pm. It was great from the beginning, both teams showed their ability with a fast paced tempo and a stingy defense. NKU was trailing at halftime by one point. I want to mention the fact that Joe Ruh, the Northern Kentucky University Photographer, was also at the game taking photos for the Athletic Department as well as the University. His photo tips for me during the game were invaluable as always. Near the end of the game I was yelling at one of the officials for a bad call and Joe pointed out to me that as a photographer standing underneath the basket, that sort of enthusiam was not proper. I agreed. A Stunned, Hollow, Feeling. We all felt this when at the end of the game, we came up short by one point. There were no LOSERS in or at this game. The women of the NKU basketball team left their heart and soul on the court. A DEFINITE SHOWING OF THEIR CHARACTER. At 8:30pm we all headed back to the hotel. The one thing that I want to mention that I was told by Carol Dunavent, Pep Band Director, was the fact that she observed the fans from South Dakota State University being cordial, and friendly as the band passed through the lobby of the Civic Center. This may not seem like a big deal, but remember that there are other team’s fans that are not of the same caliber as the Norse and SDSU’s Jackrabbits. Post Game Gathering 9:30pm There was a celebration in one of the meeting rooms at the Kahler Hotel. We were not celebrating that the NKU Women’s Basketball season was over, we were there to give tribute to the class organization that NKU Athletics and the Supporting Cast of many are today. Jane Meier and Nancy Wentzel both gave eloquent diatribes on the character of our fans, cheerleaders, the band, the families of our athletes, and many more that touch and create the family that makes up NKU. There was pizza and soft drinks and cookies and chips for all to enjoy. Never once did I hear any complaints from the basketball team, coaches and staff as well as all who were in the room. Everyone accepted the fact that the season was over with dignity and class. I was proud to be a part of this NKU family. Looking up in the stands at the game I wouild estimate the we had 100-200 making the trip. Before we left, we were told to be in the hotel lobby at 11am tomorrow for the trip home.