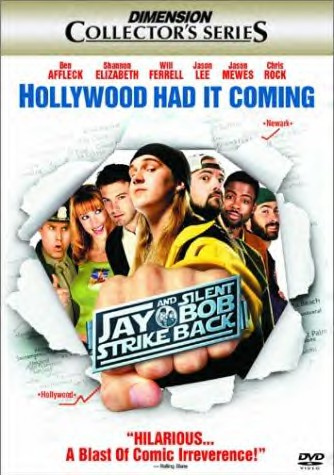 This is the film Kevin Smith fans have been begging for. A film revolving around one of the most famous comedic duos of recent film history. Of course I refer to Jay and Silent Bob. Kevin was plagued with questions about the other film worlds he created and he decided to finally answer the fans in “Jay Silent Bob Strikes Back.” That’s who this film is for, the fans of Kevin Smith and his View Askew Universe. But does the dvd deliver the same fun as the film itself?

I will warn you if you have not seen all four of Kevin Smith’s previous films then you will not understand half of the jokes. Previous knowledge of “Clerks,” “Mallrats,” “Chasing Amy,” and “Dogma” are necessary for full enjoyment, as this film references them all. So go out and get these first as I enjoyed all of them tremendously with the exception of Dogma.

Jason Mewes does a tremendous job reprising his role as Jay in this film. He stars in this picture and you would never guess from his performance that he was just a friend of Kevin’s with no acting experience, when he started working with Kevin almost ten years ago. He’s come a long way. This film is filled with stars. There is Ben Affleck, Matt Damon, Jason Lee (my favorite), Shannon Elizabeth, Chris Rock, Will Ferrell and I just named a few.

Before I give you the plot let me mention that the plot is not important in a film like this. The plot was basically strung together for the biggest comedic effect like Animal House or a Mel Brooks movies, you don’t have to know what exactly is going on to laugh. I’ll quote Jason Mewes’ character of Jay to describe the plot. “It’s a Miramax flick. We gotta bust it up so people stop callin’ us names on the internet. Even though they’re not talkin’ about us but characters based on us.” That’s the plot. Jay and Silent Bob go to Hollywood so they can stop the film Bluntman and Chronic, which stars characters based on them. This films makes fun of every aspect of Hollywood. The funniest moment of this is when Ben Affleck and Matt Damon parody themselves in a fake “Good Will Hunting 2: Hunting Season.” So, yes I would highly recommend this film. Especially if you are already a Kevin Smith fan, if not, give it a try you might be surprised to find yourself laughing out loud at these two idiotic guys from Jersey.

Now for the dvd part of the review. It’s two dvd’s, and yes they deliver the goods. The first disc has the film and audio commentary while the second dvd contains all the goodies. I was slightly disappointed by the audio commentary this time. It was not as good as previous commentary tracks but that is probably due to Affleck and Jason Lee not being present. Now for the second disc. I’ve never seen the sheer amount of deleted scenes as there are on this dvd. Everything that was cut is somehow included. Also there are short intros to each deleted scene by Kevin Smith and Jason Mewes. Not as funny as the intros with Ben Affleck and Kevin on the “Chasing Amy” dvd but still humorous. However when the intros started running longer than the scenes itself it got a tab bit tiresome. My favorite part of the bonus material was the behind-the-scenes of “JASBSB.” The behind-the-scenes is short but one of the most interesting behind-the-scenes I’ve ever seen. The cast does not keep talking about the film’s plot but they talk about their stories with the cast and crew on and off the set. Also the gag reel was very funny just like previous Kevin gag reels. One especially humorous moment involves Ben Affleck trying to ad-lib and failing miserably. The dvd also contains music videos, Story boards, trailers, TV spots, and many more extras. With a retail price of 29.95, it’s Bluntastic (Watch the movie and you will understand). A funny flick with hours of entertaining extras what more could you want?