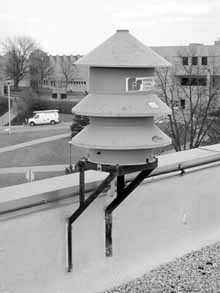 As tornado season drifts closer, sirens all over the state of Kentucky will go off at 10:00 a.m. on Tuesday, March 26. The upcoming months of April, June and July traditionally see the most tornadic activity.

While NKU isn’t participating in any evacuation procedures during the drill, Ken Knipper, Campbell County director of emergency management, said drills like the one on March 26 accomplish a heightened awareness of the dangers posed by violent weather.

“Kentucky is very prone to these things,” Knipper said. “To have something like a statewide drill will jolt us into alertness.”

The campus is pretty safe if a tornado should touch down on the plaza, said Jeff Baker, director of environmental safety. Baker said NKU’s concrete structure offers protection from tornado damage.

“It is definitely a plus,” Baker said. “We could withstand just about anything that could come through here.”

While the structure is fortified, tornadoes can be unpredictable, Baker warned, and the University has safety precautions in place in the event of a twister.

The department of Public Safety monitors local weather conditions and is responsible for alerting the University of an approaching tornado. According the NKU’s emergency response manual, telephone calls to key University personnel advising them of the situation will be made, and students are advised to seek shelter in the basement, stairwells and interior corridors of buildings. The key is to shield yourself as much as possible, said National Weather Service forecaster John Center.

“You want to put as many walls between you and the wind as possible,” Center said.

To better prepare Campbell County for the arrival of a tornado, the Campbell County Emergency Management Division has installed 11 new tornado alarms that will hopefully be online by the end of the year, Knipper said.

The campus has 2 of the county’s 19 alarms that are activated in the event of an emergency. One is atop Albright Health Center and another is on John’s Hill Road.

In addition to more alarms, Knipper said CCEMD is educating the public on how to ensure their safety in a tornado, including compiling a safety kit with bandages, tape to close off windows and doors, water and food.

“When these storms hit, they do wide spread damage,” Knipper said. “They affect a lot of people quickly and people have to take care of themselves, possibly for as long as three days.

We want them to have the supplies to help deal with the situation. It doesn’t take much.”

Even though a tornado hasn’t hit close to NKU in 16 years, Center said that doesn’t mean the Northern Kentucky area is resistant to tornados.

“There is no place that can’t be touched by a tornado,” Center said.