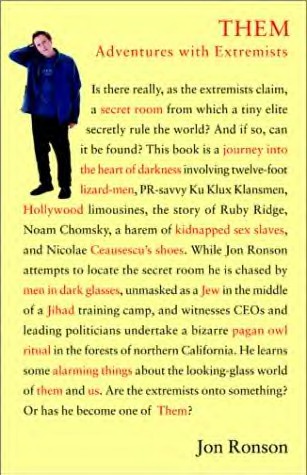 THEM: Adventures with Extremists by Jon Ronson Published 2002 by Simon and Schuster

It’s difficult to think of anyone labeled an extremist as a person with a quirky personality. In America’s popular consciousness they are unbending, sometimes frightening individuals, who want to advance their causes by any means necessary.

The stereotypes attached to the word ‘?extremist’ are often negative. They also do little to separate the people from their beliefs. The result is that the personalities of extremists are buried beneath rhetoric. What are they like when the cameras are off? What do they say when not preaching behind a podium?

This lack of knowledge on the publics’ behalf is part of what gives these extremists their power and influence. Half-shrouded in secrecy they are intimidating. But, when they come into full view, things change.

John Ronson exposes a different side of extremists in his book, ‘?THEM: Adventures with Extremists.’ Ronson spent time with extremists around the world, from Islamic fundamentalists, to a man who believes the world is run by a group of giant lizards. All share one thing in common, though: They believe the world is controlled by a group of people (or reptiles) operating in complete secrecy from the masses.

Ronson’s search for this group is what drives the book, but his quest takes a back seat to the people he meets and experiences he has along the way. He shoots guns with a survivor from Ruby Ridge and is chased by mysterious men while searching for the one-world government.

All the while, he manages to find some humor in the absurdity of it all. He retains a half-serious, half-comic tone the entire way. Intrigued, but amused at the same time.

Ronson’s style works especially well when he’s writing about people and groups that are repulsive.

The perfect example of this is Ronson’s profile of a Ku Klux Klan Grand Wizard who reads self-help books and wonders about his effectiveness as a leader. This chapter epitomizes the rest of the book, in that Ronson allows his subjects to speak for themselves, while he records every little thing they do.

Ronson follows the Grand Wizard and notices that he is so obsessed with his group’s public image that he has become a mockery of himself. The leader seems unsure of his agenda, but painfully aware of the ignorance of the group he’s trying to lead.

Near the end of the chapter, though, he dissolves back into a hate-monger and the reader is reminded what he really stands for. The strength of this book is in the tongue in cheek manner in which it is written. Without Ronson’s dry humor and his sense of the absurd, the book would be missing a major element.