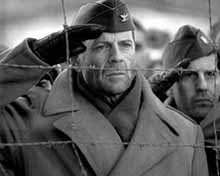 Being a typical guy, I wanted my first movie review for The Northerner to be covering an action packed thrill ride of a movie. So I relied upon a time-tested formula: “War” plus Bruce Willis equals action. Well, not exactly. What did result, however, was a well-written drama, “Hart’s War”. The film is set in a 1940s German prisoners of war camp, housing both U.S. and Russian captives.

The setting is cold and dark, with the harshness European winter in full course. We are introduced to the camp with a warm welcome – three suspected escapists being hung. The title character, Lieutenant Thomas Hart, a second year law student, is an outcast to his peers due to suspicion he confessed secrets to the Germans during low-level interrogation. Hart’s chief adversary in the film is Colonel William MacNamara, portrayed with silent brilliance by Bruce Willis.

In the following days, the Germans capture two controversial characters that are introduced to the enlisted barracks: both pilots, both officers, both black. Despite their allegiance to the anti-Nazi cause, the pilots are still subject to mistreatment within the barracks because of their race. A bigoted staff sergeant sets out to destroy them. Tragedy then strikes, when the sergeant successfully frames one pilot for an escape attempt. He is taken before a German firing squad and shot dead. The plot then thickens, as the staff sergeant also ends up dead, the victim of a gruesome murder. Colonel MacNamara then convinces the Germans to allow a court marshal trial to take place, with the colonel serving as judge. He then assigns Hart with the unpopular task of defending the accused against steep odds. What transpires in this film is an intriguing blend of morality, politics and challenge to Lieutenant Hart. The film also makes several interesting comparisons between the German’s mistreatment of Russian captives as an “inferior race” to that of the sometimes self righteous white American soldiers who mistreat their own because of skin color. Bruce Willis is exceptional in his performance as a fourth generation west point graduate who lives for the military.

In short, what starts out as a film about bigotry ends up as a film about honor. If you are looking for a big time action movie, your money will be better spent elsewhere. But if you have two hours to spend on an intellectual drama, Hart’s War fits the bill.