The stigma of the less abled 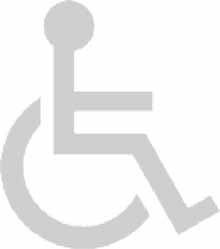 Equality exists only in theory. The burden of this stigma cannot be placed on any one person. It is a detriment that has evolved in society.

Let’s face it – society has set the standards that define what “normal” is.

While many classifications of people are shunned by society, I will focus on only one for the purpose of this editorial: people with disabilities.

These “normal” individuals enjoy luxuries that are generally not afforded to those who do not fall within the window of the “norm.”

People with disabilities are generally looked down upon, ridiculed and not taken seriously.

Rarely do people who fall within society’s elite dare to look outside the loop. I had a brief taste of how it feels to exist outside the loop when I spent a couple hours in a wheelchair.

People who knew me knew I was wheelchair-bound only temporarily, until my “experiment” was finished. However, those who did not know me probably had no idea that I was merely working on a story.

I definitely noticed a change in how I was treated by the people around me. I had grown accustomed to walking up and starting a conversation with others. People seemed less willing to talk. When people would talk to me, they would rarely make eye contact. Most people just seemed to look away. Even when people would offer me assistance – which was only three times in two hours – they didn’t look at me. It was, at that time, that I began to feel the stigma. It felt as if I had some contagious disease that people desperately wanted to avoid.

I was shocked at some of the insensitive statements that came my way. People openly asked what was wrong with me. There are polite, tactful ways to ask, but I found most people to be very blunt. I was honest with everyone who asked. As soon as I told them it was only an experiment, they seemed to breathe a sigh of relief.

Even though the comments, and the blatant ignoring, and the judgments made about me were based upon perception and not reality, it took it’s toll on me.

By the end of the two hour experiment, I was a little depressed, but mostly hurt by the way I was treated. I can only imagine what it must be like to live like that every day. I don’t know if I could muster the strength to get out of bed every morning knowing I would only be subjected to harsh treatment.

It seems too senseless to me. It’s not because they are less intelligent. We, as a society, often do not give them a chance to shine.

So this brings me back to my original question: what is normal? After all this, I still find myself unable to answer that question. I don’t think that anyone is completely normal, or completely “cool” or completely “in”.

Everyone has their own handicap – some are just easier to see.