Black and Gold or Black and White? What are NKU colors? 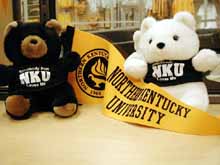 You see them everywhere on the Northern Kentucky University campus: on posters, letterhead and the uniforms of the athletes. They’re the school colors, black and gold, right? Wrong! Confused? You’re not alone. “The official colors of the university are gold and white as established by the first Board of Regents,” said Kathy Stewart, director of special events.

“People see black and gold on more things, whether it be publications, school uniforms and such, so they just assume black is one of the school colors.”

“We had to incorporate black, just for legibility purposes really,” explained Stewart.

“A lot of alumni feel strongly about the realization that gold and white are the school colors,” Stewart continued. “Certain ones will even remind you of that.”

Stewart said that is because NKU has very few cherished traditions and the alumni hold on to what they can.

Other traditions of the university are the Norse, the dragon in the water and the Hey You character, which are usually seen only at athletic events.But what you do see everyday, somewhere on campus, are the school colors. And for the record, they’re white and gold.