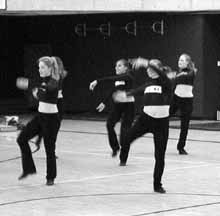 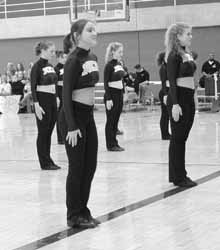 NKU was one of 22 schools who made it to semi-finals this year.

Every year since 1998 the team has been qualified to go to nationals. Last year, the team came in 9th place in finals.

“We did the best we could,” Angie Lariccia, captain of the dance team said. “It was real competitive this year.”

Alyson Colwell, member of the dance team, said the team was confident that they would do well.

Even though the team didn’t make it to finals, Lariccia said the trip was worth it.

“I think it was mainly just going down there and spending time with just your team mates,” she said.

“I feel like I had the best time I’ve ever had this year and it is because we got so close to everyone on the team.”

For Colwell, this trip will be her last. “It was pretty emotional for me,” Colwell, a senior, said. “It is the last time I’m going to get to touch that floor.”

The team always attends school functions; basketball games, Freshfushion, pep rallies and some community events. The team dances to about everything from ballet to hip-hop.

Students need a 2.0 grade point average to join the team.

No diet is required; an exercise schedule is up to the individual.

The team does have practice three times a week. About 20 girls are on the team every year, but only 14 girls can go to nationals. The team dances all year round and goes to camp at the end of the summer. Tryouts for the team will be on April 21.

“The team does everything together,” Benke said.

The team is a student group. It costs approximately $1,000 to be on the team, but there are fund-raisers that help defray costs. The members raise money to be on the team by participating at Bengals, Reds games and car washes.

“We sweat for that money,” Colwell said.

When Lariccia got to NKU, she tried out for the dance team and made it. “It has really helped me be a part of NKU because I really didn’t want to be here,” Lariccia said. “It has made me come back every year because I love to dance.”

Benke said, the goal for next year is, “Always to do better than what we did last year. Taking it a step further. We never have taken a step back.”