Steely: More than the name of a library 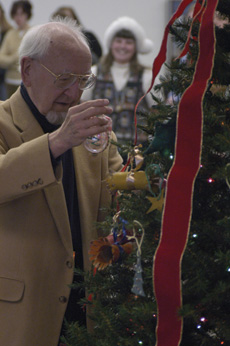 From his office on the top floor of the building that bears his name, Frank Steely can gaze out on the buildings he was responsible for bringing to the campus of Northern Kentucky University.

There is one he can see from his expansive view, the new natural science building which is in the final stages of completion, that he was not responsible for having built.

“You know,” said Steely with a wide smile, “that rascal Votruba built a building bigger than any I built.”

That’s Dr. Frank Steely. A smiling, happy man who will talk on and on about any subject you care to bring up.

At 76, he’ll remind you that he needs to be redirected, and that sometimes he forgets things like names and dates.

He is quick to lavish praise where he believes it’s due, and just as quick to criticize.

His book, “Northern: Birth of a University,” is testament to that part of his personality.

“They didn’t sell like hotcakes,” Steely grinned. “I got even with some people in there.”

The first president of NKU has spent 50 years in academia, most of it at NKU.

His modesty prevents him from bragging too much on himself, but those who have worked with and known him the longest can’t say enough about his accomplishments.

“He always put the students first,” said James Ramage, Steely’s first administrative assistant and now Regents professor of history at NKU. “He kept the classes small by building small classrooms. He said students needed to be able to get acquainted with their professors, and they can in small classes.”

That tradition continues at NKU today.

James Votruba, the current president of the university, is always ready to point out that NKU is an up close and personal campus, and he plans to keep it that way.

Ramage said Steely did things like add more classes to the schedule if a class filled up before registration was closed.

He also built a parking lot before he had permission from the state because he said students couldn’t come to the school if there was no place to park.

“He built the university faster than they thought a university could be built,” continued Ramage. “He thought the community was a generation behind in higher education and it needed to catch up.”

Steely’s first office was located in a beauty salon in Covington close to Hankins Hall, where the budding university, then called Northern Kentucky State College, was located.

Ramage said Steely gave the big, beautiful office with a view of the city to then vice president Ralph Tessener who was in charge of interviewing and hiring faculty. Steely wanted the faculty to be impressed with the view.

“That was a symbol of the way Frank was,” said Ramage. “He was a great leader.”

Steely began his college career at the University of South Carolina. He was sent to college by the Navy during World War II. The war ended before he graduated so he never saw active duty.

“I got into the world of college and never changed,” said Steely. “I decided I just didn’t ever want to leave a college.”

Steely received his doctorate from Rochester University and went on to teach and chair the history departments at Blue Mountain College in Mississippi and Murray State University in Kentucky.

He then taught and held a dean position at the University of Virginia at Wise.

From there he came to NKU.

Steely retired in the fall of 2000 but a teacher shortage brought him back.

Now, he spends his time doing research on the history of Northern Kentucky.

His office contains an old electric typewriter and a machine that reads microfilm.

A computer is noticeably missing from his desk.

“Frank has remained very active, he’s continued to be a terrific teacher; he’s continued to advise students; he’s very much involved with the university. So he has not at all sort of faded into the woodwork like a lot of ex-presidents do,” he said.

Steely said he has no future plans of retiring.

“I’m happier than I’ve ever been in my life,” said Steely. “I can do whatever I want.”