Greaves Hall use limited to formal occasions and concerts 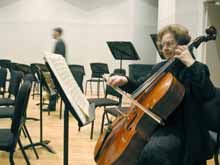 The Kentucky Symphony is one outside organization that calls Greaves Concert Hall Home and perform regularly at the venue. Here, Kentucky Symphony cellist Bernice Robinson warms up before a performance at Greaves on Sunday, Jan. 27

Martin said he hoped to book Greaves for the superior acoustics, but the music department deemed the event inappropriate for the hall since it wasn’t a formal event. As a result, the comedy show took place in Regents hall, which Martin said made the comics harder to hear.

“The original intent for Greaves is to be a lab for the music department,” Wells said. “They need a venue to use.”

Wells said since Northern Kentucky University has little space, the music department has been willing to accommodate non-musical events such as the Alumni Lecture Series question and answer sessions and university-sponsored lectures.

There are many technical reasons for only allowing university-sponsored events and musical events in the hall, said Dr. Wheaton, chair of the music department . Renting the theater out for various purposes is an expensive task he said. The theater relies on volunteers to provide technical support like lighting and stage management, he said, and the music department doesn’t have the resources to staff stage crew for many student events.

In addition, Wheaton said he wants to preserve Greaves Hall as the wear and tear on the theater adds up, forcing the music department to foot the bill on tasks like replacing lights, which cost $17 each, and various other mechanical difficulties that arise. Also, the music department was recently endowed an $80,000 grand piano that Wheaton said is contractually obligated to remain on stage since moving it frequently risks damage.

“It sounds unfair, but Greaves is expensive to maintain,” Wheaton said. “I want to make sure it is used in a responsible manner benefiting the university.”

Martin said he understands the reasons the music department may have for not allowing the comedy show in the hall, but said he thinks students should have some access to the hall.”I think as long as there is guidance and supervision, I don’t think there should be a problem with that,”Martin said “As long as someone takes responsibility there shouldn’t be a problem. I trust that students will make very wise decisions.”

To clarify the types of events allowed in Greaves, Wheaton offered examples of what is allowed and what is not. Events like student-faculty recitals, outside guest artists like the Kentucky Symphony, official university functions like convocations and lectures by the president, and outside speakers are appropriate formal functions for Greaves, Wheaton said. Events like fraternity, sorority parties, skits, comedy shows, outside vendors and organizational functions like those of the Kiwanis club Wheaton said do not qualify for use of the hall.

Martin said he wants to see something tangible on what is and what is not allowed in Greaves. Wheaton said the music department is in the process of drafting a formal policy on acceptable events for Greaves.

“We don’t have a formal policy, but there has been an understanding in the past that Greaves is for formal functions,” Wheaton said.

A compromise on the policy could be reached that would give students some access to the hall, said Leslie Dorris, executive president of the Student Government Association and Delta Gamma.

“I can understand them not wanting to let just anyone use Greaves. It is a more formal space,” said Dorris. “We should be able to strike a happy medium. I think it needs to be accessible.”