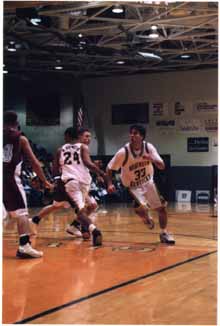 Stowers made a trio of three-point shots midway through the second half as the Norse rallied for the victory.

Bellarmine led by as many as nine points in the first half, but NKU cut the deficit to 35-34 at halftime on a Mike Kelsey three-pointer. The Norse shot 55.6 percent from the field in the second half and eventually built a six-point lead with 5:45 left on a pair of free throws by Darnell Fields.

Bellarmine cut the lead to two points three different times in the final minutes, but free throws by Stowers and Craig Sanders sealed the win for NKU. Sanders finished with 17 points and has scored in double figures in 36 consecutive games. The NKU record for consecutive games in double figures is 39 (held by Brady Jackson). NKU has now beaten Bellarmine 14 consecutive times dating back to the 1993-94 season. Bellarmine’s last victory against NKU came on Feb. 3, 1994, when the Knights escaped with a 73-72 win in Regents Hall.