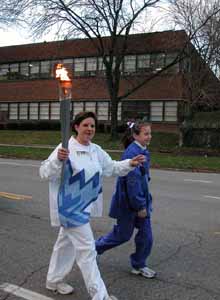 Goshorn carried the three-pound torch, made of chrome, copper and glass, a third of a mile on Victory Parkway from East Mc. Millian St. to Yale St. in Cincinnati.

Torch carriers each had a support runner to follow along side of them in case they were to fall or feel light headed. The support runner would run along side of three runners at different times. The Olympic torch run started in Florida and passed through Ohio twice. It came through Cincinnati and also Cleveland on New Year’s Day.

There were 4,000 nominees to carry the Olympic torch, but only 107 were chosen to carry it in the tri-state area. Goshorn was one of the chosen. She was nominated because of her ability to learn and overcome some difficult obstacles in her life. Goshorn’s husband nominated her online with only 100 words.

Goshorn said, “Determination is the key to success.”

The most enlightening part of her experience, she said, wasn’t only meeting a diverse group of people, but meeting people from different backgrounds, disabilities and nationalities.

Goshorn said, “Northern has been a foundation of my success.” She attributes some of her success to Student Support Services, Dale Adams and Steven Boyd.Goshorn considers it a privilege to be able carry the torch, saying it was an overwhelming experience.

She offers the following advice to others: “Follow your heart, never give up and keep your faith,” Goshorn said.Also Tracy Blake, a 1995 graduate of NKU, was selected as an official torchbearer for the Northern Virginia region and carried the torch on Dec. 21. This particular relay was dedicated as a memorial to those lost in the Sept.11 tragedy, specifically at the Pentagon. For more information on the Olympic torch relay visit www.saltlake2002.com.