Parking violators towed at their own expense 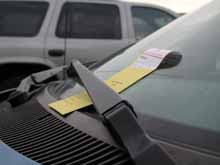 WARNING: Committing a parking violation on Northern Kentucky University’s campus may result in your car being towed.

Jeff Butler, director of Department of Public Safety, said cars will be eligible for towing after a student accumulates three unpaid parking citations.

Cars will only be towed when 10 days has elapsed since the issuance of the third citation, he said.

Butler said this program would resume after a grace period, ending two weeks after the first day of class.

The policy, established by the Transportation Advisory Committee, is designed to ensure adequate parking availability and fair enforcement of parking regulations.

This program is not new, said Butler. There is a tow warning in NKU’s parking regulations.

“We just started a more stringent enforcement of the regulations,” Butler said.

“We towed two in August, four in September, 18 in October, 19 in November, none in December,” he said.

A list of cars eligible to be towed, called the Scofflaw List, is provided to DPS officers and cadets. Butler said they couldn’t notify students that their car is being towed because they find the cars parked.

“Persons usually learn their vehicle has been impounded when they find it missing,” he said.

Students can find out if their car has been towed by calling DPS.

According to Butler, the number of parking citations has declined each month since September.

“I feel the November and December declines are in part due to the tow policy,” Butler said.

Katie Herschede, SGA president, said students parking in places where parking is not permitted – such as areas designated for walking and turning around – creates dangerous situations and decreases visibility.

Herschede said she hopes people who arrive on campus and cannot find a close parking spot will park in a less desirable area.

“Usually, you can find somewhere on campus [to park],” she said.