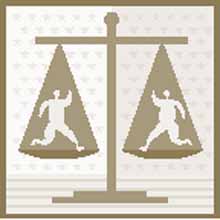 It’s one of those ironic situations where an idea is discussed and then… voila! It comes together just when the subject matter becomes the talk of a nation.

“The Freedom Chronicle,” a quarterly online newsletter published by the Institute for Freedom Studies, made its debut a month and a half after the terrorist attacks of Sept. 11 when questions regarding civil liberties and freedom were on the mind of every American citizen.

The idea for the newsletter was tossed around for a year by IFS and became a reality in November.

“The whole idea about the newsletter is to provide a forum where people could talk generally about the idea of freedom,” said Prince Brown, director of IFS. “Whatever ideas are applicable and whatever ideas make sense in the context of the theme of freedom.”

The inaugural issue addressed the anti-terrorist bill recently signed by President Bush. Editorials were written by Jerald W. Richards, chair of the department of Sociology, Philosophy and Anthropology at NKU, and Romona Brockett, professor of political science and African American studies and editor of the publication.

“People are just really excited to read it,” said Brockett. “We’ve had responses from the NAACP in Washington D.C. and lawyers in California and New York.”

Brockett, along with Mona Hall, project manager and associate editor, and J. Michael Thompson, professor of political science, were responsible for getting the site and publication started.

The second issue, due to be published on Feb. 1, will cover issues of religion in the context of freedom.

Brockett said Mary Northington of the Northern Kentucky African American Heritage Task Force will be submitting an article along with two to three other people yet to be named.

Brockett said the theme of religion and freedom is apropos in light of the upcoming Martin Luther King Jr. holiday. “Issues of non-violence and promotion of peace, that’s what he was about as a minister,” said Brockett. “I think that was the mission of freedom at that time.”

Although responses to the articles cannot yet be made on the Web site, Brown said people can respond by email to the IFS at freestudies.nku.edu