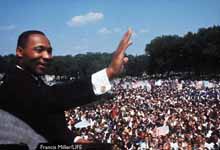 The first event, which takes place Jan. 17, brings local civil rights leader and pastor of the New Prospect Baptist Church, Rev. Damon Lynch on campus for an address in Greaves Concert Hall at 12:15 p.m. The speech will cover non-violent strategies for instituting change. Lynch said he hopes it makes an impression on young adults in attendance.

“I want them to take away a sense of responsibility and a commitment to the improvement of the condition of society,” Lynch said.

On Martin Luther King Day, Jan. 21, a documentary produced by the Kentucky Oral History Commission titled “Living the Story: The Civil Rights Movement in Kentucky” will premiere in the Otto Budig Theater in the University Center lobby. The documentary will also show in public viewings across the state and air simultaneously on public television station KET. A discussion will follow the one-hour program, which covers the history of the civil rights movement in Kentucky.

Cheryl Nunez, director of the Office of Affirmative Action, said the documentary brings to light many lesser-known activists in the civil rights movement.

“What this documentary tries to do is to hold up the everyday people in our backyards who dedicated their lives and confronted injustice,” Nunez said. “They were factors in the movement.”

The documentary took four years to make. Over 175 people who experienced the civil rights movement were interviewed, of which 15 appear in the film.

The idea to document Kentucky’s struggle for civil rights came from desire to show young people what living in a segregated society was like, said Betsy Brinson, executive producer of the film. First-hand accounts of the civil rights movement are the best way for young people to learn about history, she said.

“We conducted focus groups of high school students to see how we should approach the film,” Brinson said. “What many of them ended up saying was that they didn’t want to see any more historians talking.”

Brinson said she and co-producers Arthur Rouse and Joan Brannon interviewed people from all over the state, including a 102-year-old western Kentucky resident who is the granddaughter of a former slave and Civil War veteran.

One of the messages Brinson said she hopes to convey through the work is that young people are ignited and sustain the civil rights movement.

“One person can make a difference,” Brinson said. “These people took advantage of opportunity. They learned how to lobby the legislature and bring about change.”

Lynch said the stories of how people dealt with injustice in the past are particularly relevant today and need to continue to be told.

“The civil rights movement should never be forgotten, the gains never forgotten and what still needs to be accomplished never forgotten,” Lynch said. “It is important, because a lot of conditions that exist then exist now.”

Both events are open to the public and free of charge. The viewing of “Living the Story: The Civil Rights Movement in Kentucky” on Jan. 21 begins at 8 p.m.. While registration isn’t required, Nunez said it is encouraged for the documentary viewing to get an idea of how many people to expect. To register for the viewing call (859) 572-6047.