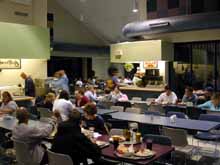 The Hotel Employees and Restaurant Employees Union and NKU’s Students Together Against Racism student organization are petitioning and distributing pamphlets around campus.

Sodexho manages the Norse Commons Cafeteria and both cafeterias in the University Center.

H.E.R.E. is also preparing to file an unfair labor practice charge against Sodexho for harassing employees who have tried to support a union, said Ryan Nissim-Sabat, H.E.R.E.’s organizer.

Management has allegedly threatened them with possible termination if they attempted to organize, said Alex Jarman, a freshman and a member of S.TA.R.

“That is illegal,” said Nissim-Sabat. “Workers have a right to organize and companies are not allowed to threaten their employees.”

If NKU’s cafeteria workers can form a union, Sabat said, they could then create a contract that lays out all the working conditions and all the ground rules including wages. Without that, it’s all based upon the managers’ discretion, he said.

“They got a system of favoritism, where, it really doesn’t matter how hard you work,” Sabat said. “The manager is going to award the favorites.”

Jarman has spoken with at least two cafeteria workers and said a female worker described what seems to be a sexist pay rate distribution.

“She’s making $5.95 an hour and they hired in male workers at $7 an hour,” Jarman said. “There’s been documentation where they have promised people, ‘Will hire you in at $6 an hour.’ But then, it shows up on their paychecks, $5.50. And they have to fight tooth and nail just to get that extra 50 cents.”

Sabat said Sodexho’s health coverage is too expensive for the workers to purchase. With a union, they could negotiate a lower rate, something that’s more affordable for themselves and their children.

Across the Ohio River, Sabat said working conditions at University of Cincinnati are much better for caterers primarily because they have a union and a good contract.

“It’s not like whatever management says goes,” Sabat said. “If management comes and harasses someone, they can file a grievance and have a fare hearing, something that NKU workers can’t have.”

Thomas Butcher, a freshman, is sympathetic towards the workers’ situation; however, he’s not satisfied with Norse Commons’ meal selection.

U.C. is catered by ARAMARK, a smaller food service and management business that caters for 375 educational facilities in the United States and abroad.

S.T.A.R. is also attempting to gather the support of other student organizations, Jarman said. “It doesn’t seem right if it’s just S.T.A.R. talking about this,” he said. “It needs to be a whole campus thing because the lunch rooms concern everybody.”

The public relations person for Sodexho, Leslie Ahna, was unavailable for comment.