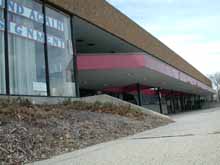 Northern Kentucky University may transform the 4-acre abandoned Thriftway property on U.S. 27 into a hotel and conference center that would give the college the ability to play host to seminars and house guests.

The NKU Foundation, which bought the land in January 2000, plans on leasing the land to a hotel developer, said Dr. Jim Alford, foundation president.

With the completion of the new science building and the increasing enrollment, enticing a hotel to the area is NKU’s top priority, NKU President James Votruba said.

“The larger we get, the more we need to have access to residential conferencing space nearby,” Votruba said. “I see this as highest priority.”

In addition to providing more meeting and conference space at NKU, which is the most cramped college in the state according to Kentucky Council on Postsecondary Education, the hotel will provide students with place in walking distance to have guests and family stay, a commodity which NKU is sorely lacking, said Votruba.

“Most other college have one(hotel) in walking distance and have conferncing capacity,” Votruba said. “It will be a major convenience. Our ability to house people near the campus is terribly important.”

Alford said the slowing economy will impede the process of finding potential suitors for the land. The first step in bringing a hotel to the entrance of NKU is to conduct a feasibility study to determine whether NKU and Highland Heights can generate enough business to support a hotel, Alford said. Since the hotel won’t be located directly off an interstate, Alford said the hotel can’t rely on traffic passing through for business. A majority of the patrons of the hotel will be those visiting the university, Alford said.

Votruba said he feels the University will provide a sufficient amount of business to sustain a hotel citing that NKU’s enrollment will reach 15,000 within 2 to 3 years.

“As we grow, the demand for lodging will increase,” Votruba said.

To reach this goal, Alford said the NKU Foundation is working with the city of Highland Heights accommodate a hotel company. In November, the city council narrowly approved by a 4-3 vote to lower the mixed use zoning regulations from 25 acres to 10 acres, allowing for construction on the Foundation’s property. This act comes after several years of struggle by the city of Highland Heights to place a hotel within its city limits.

In 1999 when the city declared the Gateway West area around Sunset Dr. a blighted area to seize property for redevelopment, which included a proposed hotel, residents brought a lawsuit against the city to prevent it. Property owners filed suit and U.S. District Judge William O. Bertelsman ruled in favor of the owners saying the city officials improperly designated Gateway West.

“I thought it was a much better location than Gateway West,” Drye said. “There is quit a bit of isolation from a residential area.”

There are, however, some private residences near the 4-acre property and the reaction to the possibility of a hotel being constructed near there house caused mix reactions among the neighborhood. Arlene Zeis resides on Harriet Ave. about a block from the vacant lot and is concerned about the hotel bringing in more traffic.

“The neighborhood is nice and quiet the way it is,” said Zeis, a resident of Highland Heights for 37 years.

Ron Rizzo, who lives on Marshall Ln. adjacent to Thriftway, said that he would support a hotel because it would be good for the town.

“It is better than an empty building,” Rizzo said.