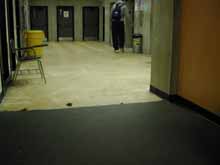 The renovations will take about three semesters, and some people have concerns about a lack of campus space while the building is closed.

“The closing of the building presents significant classroom problems,” said Mike Baker, vice-president for Administrative Affairs. “We are working with the Academic Affairs office on this matter. This may mean putting trailers on campus to use as classrooms.”

The renovations will also cause the displacement of several offices. The Academic Advising Center is one of those offices that will be displaced.

Mary Paula Schuh, director of campus planning, said the possibility of moving the Advising Center to the University Center is being investigated.

Once the renovations are completed, the building should provide more space for the departments being moved in. Several offices, such as the Political Science department and Literature and Language department are scheduled to be moved.

“We are really cramped,” said Dean Minix, Chair of the Political Science department. “It’s not a good place for students or student organizations. If we were to hire anymore faculty, I don’t know where we would put them.”

Danny Miller, chair of the Literature and Language department said he is looking forward to having more space in the Natural Science Building once the building is complete.

Funding is another concern for the renovations of the old building. The project will cost around $16.4 million.

The 2000 General Assembly provided $1 million dollars for renovations. Getting more funding in light of the current state budget picture will be questionable.

“With tax revenues being low, the governor is not giving any money for construction,” said Baker. “This presents the biggest challenge.”

One of the primary goals of the renovation is to create a warm welcoming environment. There is the possibility of a new plaza area being developed on the west side of the building.

“We want to create new entrances,” Schuh said. “Particularly on the west side of the building. Entering on the stairs is not very inviting.”

One of the plans is to replace everything mechanical, making the building more energy efficient. The renovation will also call for the instillation of a sprinkler system, which the building does not currently have.