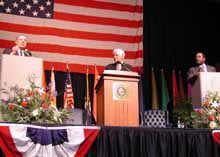 In a question-answer format, Clooney began the debate by asking how the United States could win the war on terrorism.

“There will be a continuous war against terrorism. I doubt we will ever reach a point where we can say we have completed this process,” answered Cuomo. “I think we have been fighting the fight against terrorism for a while but sporadically and unintelligently without a focus, but now we have focus, now we know how serious it is, now we know who the enemy is, in general.”

Keyes agreed with Cuomo that the war on terrorism is perhaps the “first perpetual war in our history” but added that one should not exaggerate the extent of this danger as being a new situation in American history. He said that the new threats posed since the Sept. 11 attacks were new to the current generation but not to America as a whole. Keyes continued by reproaching the government to some extent for not “taking the proper strategic approach to terrorism” but rather assuming a more defensive reactive approach instead of having an assertive policy.

“Since Sept. 11th it’s become really popular to tell Americans how much of our liberty we’re going to have to sacrifice in order to deal with the terrorist threat,” Keyes said. “On one level it’s almost as if our government and our national security (is saying) ‘We can’t defend you, unless you surrender your liberty,’ and that’s a bargain I will not accept.”

While debating whether America has too much government control in peoples’ lives, Cuomo replied that in order to maintain the current standard of living, a sufficient amount of government is needed. He acknowledged there should be no more government power than necessary. Cuomo argued that because government organizes and maintains public education, infrastructure, Medicaid, welfare, health insurance and other such social programs, it is needed.

“You wouldn’t be able to survive without government,” Cuomo said. That statement was met with a chorus of boos from the audience and a scathing rebuttal from Keyes.

The evening closed peacefully with a brief open question time between the audience and speakers. Clooney concluded the lecture by remarking that it had been an evening he would not soon forget.