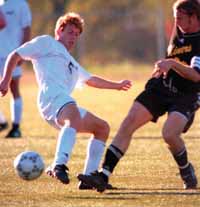 Things are looking up for the Northern Kentucky University men’s soccer team after its current three-game winning streak. Because of that streak, the Norse have clinched fourth place in the Great Lakes Valley Conference and home-field advantage in the first round of the tournament, which starts Oct. 31.

“This was really important for us,” NKU junior Jeff Anderson said.”We’ve won more games at home. Everybody is there for us and it’s a better environment.”

In beginning the win streak, the Norse (7-3 in GLVC, 10-7 overall) first defeated Quincy (Ill.) University 2-1 on Oct. 14. NKU broke a three-game losing streak with that victory. Anderson and junior Kevin Morath each scored goals in the win for the Norse. Junior Mike Poole also added an assist.

The Norse next traveled to the University of Missouri-St. Louis on Oct. 19. NKU was down 2-0 at halftime. However, Anderson rescued the team by scoring two goals in the second half, including the winning goal with two seconds left in the game as the Norse won 3-2. Greg Colston scored the other goal for NKU.

“In the second half, we pick it up and play our game,” Anderson said.

Even with the fourth seed wrapped up, the Norse kept right on rolling as they took on the University of Southern Indiana on Oct. 21. NKU had the lead early and never looked back in a 3-1 victory. Anderson scored yet another goal and added an assist in the game. With his three goals in the last two games, Anderson, who leads the team with nine goals and five assists this season, was also named the GLVC Player of the Week.

“It shows we’ve worked really hard,” he said. “We’ve played more offensively on the field. I’ve had the help of my teammates and it has given more opportunities for me to score.”

Senior Nathan Gindele and Morath also chipped in a goal apiece for the Norse in the Southern Indiana game. NKU has had a lot of help from everyone to improve upon last year and get where the team is at this point in the season.

Freshman goalie Nate Madden has done well for NKU too. In 16 games, he has recorded 59 saves and has only allowed 31 goals, 1.92 goals against average (GAA).

NKU will next play in the GLVC Tournament. The Norse will play host to Quincy University, the fifth seed, Oct. 31 at the Town ‘ Country Sports Complex in Wilder, Ky. If NKU gets past the first round, the team will travel to Edwardsville, Ill. to face Southern Illinois-Edwardsville (SIUE) in the semifinals of the tournament on Nov. 3. The GLVC championship game will be played on Nov. 4.

“In the Quincy game, we’ll be really fine. The finals will be the roughest game,” Anderson said. “If we play the whole 90 minutes, we’ll be fine.”