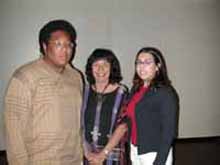 Elizabeth “Betita” Martinez’ day of awakening occurred when she was very young.

In her Oct. 17 speech at Northern Kentucky University, Martinez described an experience which may have been the catalyst for her lifelong work as an activist for equal rights. When she was a child, Martinez and her father boarded a city bus in Washington D.C. and were forced to sit in the back because of her Mexican heritage. Even at that age, Martinez recognized that something was wrong.

“What is this all about?” she asked.

Martinez has spent her life answering this question and trying to rectify the injustices committed against people because they are of a certain color, race, sex or culture.

She spoke on a variety of social issues. She first began her quest by working at the United Nations as a researcher, then as an editor for a couple of different publishers and in the 1960s, in the black civil rights movement with the Student Nonviolent Coordinating Committee (SNCC). She later traveled to New Mexico to participate in the Chicano movement. In 1976, Martinez moved to San Francisco where she currently lives and is director of the Institute for Multi-Racial Justice.

Martinez further explained there were many movements during the 1960s primarily initiated to create a different kind of society. In addition to the Black civil rights groups, there were also Chicano, Native American and Asian movements. The women’s movement was begun by middle class white women, but was later joined by women of color. She was making the point that most of the information on these movements has been left out of mainstream literature.

“If you don’t know much about these other movements, it’s not your fault,” said Martinez. “There are only small pieces in the history books.”

She said that our U.S. school curriculum is still separated into boxes. The teaching about the different civil rights movements, ethnicity and multiculturalism should not be relegated to separate courses such as ethnic studies. All of this information should be included in our history books and courses.

“I think since the ’60s, there’s nothing more frustrating as the backlash against the gains made,” said Martinez. “They want to end bilingual language. There’s attacks on affirmative action.”

She said the most glaring example is the denial of affirmative action. One does not even have to prove that affirmative action has helped 47 people, but that it has helped at least one. She gave an example of the many young Chicano women who would have never been able to go to college had there not been laws to help them.

She said there have been backlashes against liberties gained by oppressed peoples throughout history; however, since the collapse of the Soviet Union, those destroying these liberties have taken on a particular power. Without another superpower to compete with, the United States has nothing to worry about now. It can now perpetuate its manifest-destiny mentality without competition. She cited an example of this when the United States refused to send representatives to the United Nations conference on racism because it did not like two of the items on the agenda.

“That’s real democracy,” Martinez said with sarcasm. “The mentality is so bully.”

She said there is a long list of military and covert actions committed by the United States in the name of manifest destiny, one of these having been the Vietnam War. One way these actions are covered up for the American people by the government is with the “goodies of consumerism.”

“Go buy Nike,” said Martinez. “Don’t worry about who is being bombed today.”

She said she thinks this is related to the “dreaded tragedy of Sept. 11.”

“Why did this happen? What is it all about?” she asked. “I, along with others, do not believe the answer is to go kill thousands of victims elsewhere.”

Martinez also asked, “Who really sent those planes?” She said there are many theories out there as to who the culprit is and some are far-fetched.

Martinez also explained that the Sept. 11 action has caused hidden political agendas. She said there are two bills in Congress now that will curtail our civil liberties if they are passed.

“They are both scary,” she said.

She explained that the one bill, the Patriot Bill, would allow the government to do such things as tape our voice mail, look at our Internet activities and permit house searches. It would also permit law enforcement agencies to hold illegal immigrants for an indefinite time. She said this type of law reflects the reactionary beliefs of the super right wing and it discourages dissent.

She also believes that the terrorist actions are our wake-up call.

Martinez has authored quite a few books and articles as well as co-directing a video. According to Spectra Online, her “best known work is ‘500 Years of Chicano History in Pictures.’ ” She has also written “De Colores Means All of Us: Latina Views for a Multi-Colored Century,” “Letters from Mississippi” and “The Youngest Revolution: A Personal Report on Cuba.”

In the question and answer segment, Martinez was asked if she thought non-violence is still an effective action. She said, yes, that in the name of Gandhi, it is a more practical application.

“If you fight back, you’ll get killed. You won’t build mass movement,” she explained. “I still think it’s the correct way to go. That doesn’t mean, though, if an army is after you, you shouldn’t get your _____ together.”

She was also asked what people at NKU can do. She answered that they can pick up the battle for affirmative action. She encouraged the audience to participate in such forums as S.T.A.R.’s Campus Dialogue on Racism on Thursday, Oct. 18, and the affirmative action rallies scheduled for Monday, Oct. 22, at NKU as well as the Oct. 23 Fountain Square event in Cincinnati.

Martinez offered advice on how individuals can help overcome racism and sexism.

“It is a matter of principal. If you recognize racism, do something about it,” she advised. “Never let a sexist or racist remark go by. We are individually responsible to do that. It’s an empowering thing.”

She said there are always struggles out there to be fought and whatever a person takes up to fight for, he or she is doing the right thing. Just say, “I can make a difference.”

If people can at least do this, Martinez said, it is a blow against the forces that want to turn back the clock.