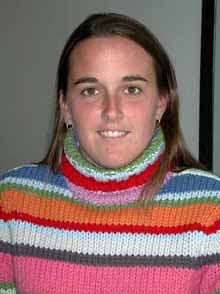 Northern Kentucky University’s Betsy Moore, a senior from Cincinnati, is the Northerner Female Athlete of the Week. Moore, a forward on the women’s soccer team, led the Norse with a goal and assist in the 3-0 win over UW-Parkside and four assists in the 8-0 win over Lewis.

“Betsy is an All-American and big part of our program,” said coach Bob Sheehan.

Moore has been a big part in NKU’s 14-0 record and No. 1 ranking in Division II this season.

She was Great Lakes Valley Conference Player of the Week and first team All-Conference last season.

“It’s a privilege and exciting to be named Athlete of the Week,