Delta layoffs were a ‘cold slap in the face’ 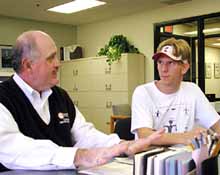 Nearly three weeks after the unexpected layoff of all 127 employees of the on-campus branch of Delta Airlines, students are still in shock, upset, and trying to find new jobs.

Many of the former employees were extremely hurt by the way Delta’s corporate office handled the situation.

Cindi Kurczewski, spokesperson for Delta’s corporate office in Atlanta, cited financial problems stemming from the Sept. 11 attacks as the reason Delta closed its three campus call centers across the country.

“As unfortunate as it is, we had to make the decision to close the campus call centers quickly to reduce expenses and preserve cash,” she said.

Many employees felt the supervisors at the NKU office were very upset by the news. There were multiple accounts of the supervisors openly being upset and crying Oct. 5, the day of the closure.

“Our supervisors were in tears, breaking down crying,” said junior Nikki Wetherell, a former Delta employee.

Senior Josh Perkins, a four-year employee of NKU’s Delta office, said he had planned to work for Delta in the future.

“After experiencing the rude and cold-shouldered treatment that Delta dished out to its less fortunate employees, you can be certain I will never work for the company again,” he said.

Perkins said he wasn’t notified of the closure of the office until Monday. He said he should have been notified Friday.

He said when he was notified, the supervisors made no attempt to try to make him feel better or inquire if he had found a job, simply letting him know what he had to do.

“You could tell she was reading it off a piece of paper, no attempt to show feeling at all,” he said.

Kurczewski said this is because they were classified differently.

“The college call-center employees were considered a temporary work force, which is evaluated differently,” Kurczewski said.

Senior Antonio Mazzaro, who was with Delta four years, said he felt they were temporary employees only in name. He said they were classified as “ready reserve,” which he said was a term used for seasonal employees that have a foreseeable termination day in sight.

Mazzaro said he felt more like a part-time worker.

“If I was truly a ready-reserve employee, I would’ve agreed when I was first hired to a date which I would no longer be employed. As a college worker that was never even discussed with me.

Mazzarro said they regularly bid on schedules in four months intervals, which is not something that ready-reserve employees would normally do.

Mazzarro said that everyone at the NKU office received the same severance package: two weeks pay and flight benefits through Oct. 17.

“My brother has been working there for six months. He got the same severance package I did, and I had been there for four years,” he said.

Mazzarro said he was hurt by the closure, even though he could see it coming.

“It was a cold slap in the face,” he said, “It was a screaming alarm clock that wakes you up in the morning. With an alarm clock, you set it at night so you know it’s coming.”

Mazzarro provided “The Northerner” with a copy of the e-mail he sent to President Votruba Oct. 1, four days prior to the closure of the NKU office.

In the body of the e-mail, Mazzarro expressed his gratitude for the opportunity to work there.

Mazzarro wrote: “For NKU students such as myself, it’s a chance to get a job with a Fortune 500 company that works around my school schedule and looks great on a resume.”

Mazzarro said Votruba’s reply, dated Oct. 7, regurgitated information that he already knew and it offended him that Votruba said the closure is one of the prices we pay for the Sept. 11 events.

Mazzarro said that like with an early-morning alarm clock, he was still startled and upset when it “went off.”

Mazzarro said one reason the campus call centers closed was because they were losing money.

“If you knew the whole situation, you would know it wasn’t completely related to Sept. 11. If we were not profitable, they would not have kept us open regardless of Sept. 11,” he said.

Mazarro said some of his co-workers went to Applebee’s after the layoffs to drink away their sorrows. He said he tried a different approach.

“I went out to find a job,” Mazarro said.

Mazarro said it took him only one day to find new employment. He said that five former Delta employees got a job at the same place, the Barnes and Noble at Newport on the Levy.

Other students have not been so lucky, and many are still seeking employment. Some former Delta employees reported they have been to the unemployment office.

Despite help from the Career Development Center, finding a job hasn’t been easy for some. One problem has been scheduling conflicts, which weren’t problematic before because of Delta’s on-campus location and being flexible with hours.

Wetherell, who worked at Delta 2 1/2 years is one with such a problem.

“It’s going to be impossible to get a job in the middle of the semester. There’s just not time for it,” she said.

Larin Daily has the same problem.

“It was brought on us so quick. I really don’t know what I’m going to do right now. I can’t afford to be jobless…I’m trying to find time to find a job,” Daily said.