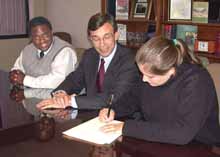 What started out as a routine traffic stop for the Department of Public Safety turned into an arrest for Driving Under the Influence.

Students who watched the arrest take place near Norse Commons recognized the suspect: Director of University Housing Todd Duncan. His arrest was a planned event that was part of the Collegiate Alcohol Awareness Week.

Duncan said an activity like the fake arrest was an effort to take an important message to the students in a creative way.

“The goal of an activity like this primarily is to increase awareness to provide people the opportunity to think about their decisions,” Duncan said.

Other events University Housing did to commemorate the week included a showing and discussion of the film “28 Days,” and having a Grim Reaper walk around and tap people, making them “dead” for the day, to show how people are affected by drunk drivers.

There was also a memory wall in Norse Commons where students could write the names of people they knew that were hit or killed in alcohol-related crashes.

Duncan explained that the activities of Collegiate Alcohol Awareness Week is to encourage students to think and make responsible decisions, not to deter consumption of alcohol all together.

“These efforts are not on the moral decision not to use alcohol. That is for the individual to decide within their own value system,” he said.

Duncan also said although drinking is a personal choice, students should be reminded that drinking on campus comes with consequences. He noted that 80 percent of the residential population is not of legal drinking age and NKU gives fines for drinking in addition to other penalties.

“It’s a preventative measure to make the consequences real. For some people, that’s getting in their pocket book or wallet,” Duncan said.