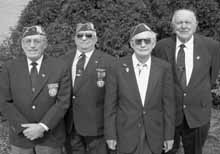 Some soldiers go to war and come back heroes. Some pay the ultimate sacrifice for freedom. There are still many who serve in enemy prison camps, instead of muddy trenches.

Frank Bates, James Blake, Lewis Grivetti, and Louis Holger were all POWs in different places. Still, their stories all had a hauntingly common thread.

One common theme was starvation.

German POW Frank Bates, who lives in Hamilton, Ohio, said he weighed 165 pounds. when he went in and only 96 pounds when he was liberated only nine months later.

“Most of the time we didn’t have anything to eat. I didn’t sleep too much at all. I was hungry all the time,” he said.

“We ate that. Man, that was good. If there was mold on it, you didn’t scrape it off. You ate it. You couldn’t afford to lose them,” Blake said.

Blake also remembered a time when they had some milk. He said he was allowed to help distribute the milk so he filled up his canteen.

Blake considered himself more fortunate than some of the other POWs.

“At least I had a barracks and a bed,” Blake said.

Latonia, Ky. resident Lewis Grivetti was a German POW held at the camp known as Slaughterhouse 5, made popular by Kurt Vonnegut Jr.’s 1969 novel of the same name.

Grivetti said they always carried spoons with them so if they found food they could eat it.

He said if anyone found any food in the cellar, he would eat a little bit and tell the others about it so they could have some.

Cherry Grove, Ohio resident Louis Kolger was the only one of the four who was a Japanese POW. He said food also was scarce in his prison campl.

“Immediately, you knew you were prisoners of war because you would maybe get a half a cup of cold soup,” he said.

Kolger said that they were often served rice, sometimes with larvae in it.

He said the Japanese cooked the rice over fire.

“I remember several times the rain had been so heavy they couldn’t even build a fire to cook our rice,” Kolger said.

He said they ate it raw.

Kolger recalled one time time they were on a ship and had about a space of 18 inches to move.

“Many of these people had dysentery and diarrhea. After a couple of hours you could imagine what the floor look like,” he said.

They said that they didn’t try to escape. Kolger said the reason was they put ten men together.

“If one of the ten escaped, they would shoot the other nine men. You didn’t dare escape,” he said.

They said that the POWs worked together to help each other.

“I would say there were people that would not be here today or have been liberated if we hadn’t worked together and helped each other,” Bates said.

Bates said when they were rescued, many of the soldiers were in very poor condition.

“Some of our POWs had to be carried to the trucks. Had it been another month, there would have been several that didn’t make it out,” he said.

Kolger had a specific motivation for getting out: “I didn’t want to leave my bones in enemy hands,” he said.