Female Athlete of the Week 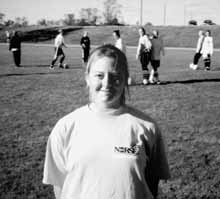 Northern Kentucky University’s Betsy Moore, a senior from Cincinnati, is the Northerner Female Athlete of the Week. Moore, a forward on the women’s soccer team, led the Norse with a goal and assist in the 3-0 win over UW-Parkside and four assists in the 8-0 win over Lewis.

“Betsy is an All-American and big part of our program,” acknowledges coach Bob Sheehan.

Moore has been a big part in NKU’s 14-0 record and No. 1 ranking in Division II this season. She is currently third on the team in goal scoring with 10 and tied for first on the team in assists with 13. She was Great Lakes Valley Conference Player of the Week and first team All-Conference last season.

“It’s a privilege and exciting to be named Athlete of the Week,” said Moore. “Hopefully we can get back to the Final Four this season and go to the National Championship and win it.”