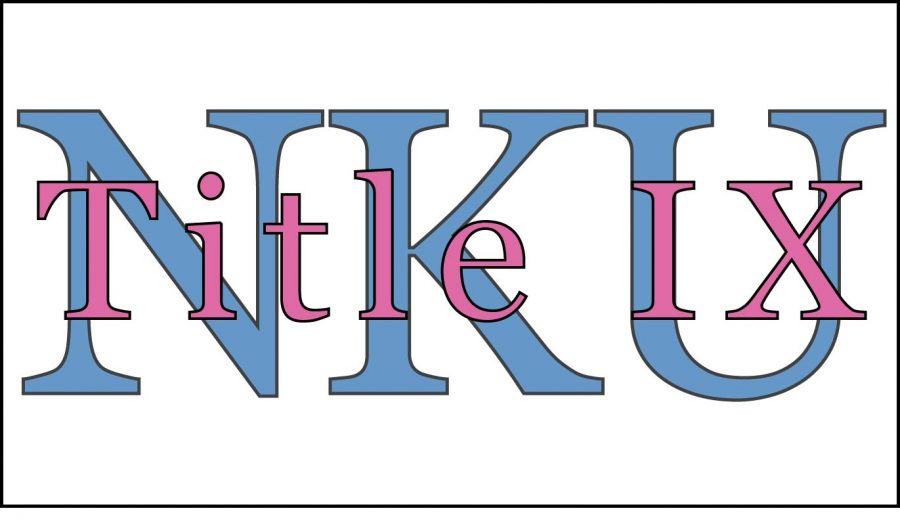 Title IX was a part of the Education Amendments of 1972 and has since become an integral part of the way education works in America. This major piece of legislation states: “No person in the United States shall, on the basis of sex, be excluded from participation in, be denied the benefits of, or be subjected to discrimination under any education program or activity receiving Federal financial assistance.”

“It should be noted that the Title IX legislation was tied to schools that receive federal aid,” said Jane Meier, former NKU athletics director. “If a high school or an elementary school was receiving money for their lunch program, then they were obligated not to discriminate against anyone, male or female.”

Bernice Sandler, known as the “godmother of Title IX,” was a major player in pushing for women’s and girls’ rights in education. After experiencing a great deal of discrimination while applying for teaching jobs at the University of Maryland, she would eventually lead the charge that would manifest as Title IX.

This was felt most at institutions of higher learning, as most universities were and still are funded by the federal government in some way. Meier, who worked as a coach for various women’s sports teams at NKU from 1978 to 1988—when she became athletics director—lived through the changes made by Sandler and Title IX.
Title IX and women’s sports
“In the Northern Kentucky area, believe it or not, the only team sport available to me in the early ‘60s was girls’ softball, and the Catholic Youth Organization actually had organized leagues,” Meier said.

Equality in sports was not the only reason Title IX became an educational staple, but it was one of the first things felt by universities nationwide.

NKU’s first president, Dr. W. Frank Steely, and its first dean of students, Dr. James Claypool, made a commitment to fund both male and female sports equally. This all took place before 1972 and the start of Title IX, which gave NKU an advantage in women’s sports while other colleges lagged behind.

“It was so controversial at any other college because in the United States there was a push back,” Meier said. “If we start women’s sports that means we’re going to take money away from the men’s sports and men’s opportunities. Part of it, more than anything, was the financial suddenness of, ‘we’ve gotta start a women’s program.’

Today, Title IX enforcement in athletics requires students and faculty to have equal opportunities when compared to the relative population. Teams need to have a near-balanced number of players, and sports offered to either gender require the same. Universities are out of compliance if they do not follow these regulations, and NKU is doing better than most according to data collected from the U.S. Department of Education. Faculty, for the most part, see somewhat equal pay and equal opportunities for coaching the myriad sports offered at NKU.
Today’s Title IX and sexual misconduct
Current U.S. Secretary of Education Betsy DeVos proposed changes to Title IX late last year, but they are still under review. One of the more controversial aspects of the proposal would “require schools to apply basic due process protections for students, including a presumption of innocence throughout the grievance process; written notice of allegations and an equal opportunity to review all evidence collected; and the right to cross-examination, subject to ‘rape shield’ protections.”

Cornell Law School describes rape shield protections as a rule that excludes all other evidence relating to an alleged victim of sexual misconduct that is offered to prove a sexual predisposition. This means that a survivor’s past sexual encounters cannot be used against them in court as evidence defending or opposing the allegations made.

NKU adjunct law professor and 6th Circuit Judge Amul Thapar reaffirmed the idea of this type of cross-examination after “Doe v. Baum” in September. In Thapar’s opinion, “if a public university has to choose between competing narratives to resolve a case, the university must give the accused student or his agent an opportunity to cross-examine the accuser and adverse witnesses in the presence of a neutral fact-finder.”

“Doe filed a lawsuit claiming that the university’s disciplinary proceedings violated the Due Process Clause and Title IX,” Thapar wrote. “He argues that because the university’s decision turned on a credibility finding, the school was required to give him a hearing with an opportunity to cross-examine Roe and adverse witnesses.”

Per the U.S. Department of Education, educational programs and activities that receive federal funds must operate in a nondiscriminatory manner. A few of the key issue areas in which recipients have Title IX obligations are recruitment, admissions and counseling; financial assistance; athletics; sex-based harassment; treatment of pregnant and parenting students; discipline; single-sex education; and employment.

It also protects people who opposed an unlawful educational practice or policy, or made charges, testified or participated in any complaint action under Title IX from retaliatory measures. If a recipient of federal funds does retaliate, it is considered a violation of Title IX as well.

According to NKU Title IX Investigator Angela Zippin, the university had a more decentralized process for filing formal complaints before she was brought on in mid-November 2018. Before, complaints filed regarding student sexual misconduct would be handled by the Office of Student Conduct, Rights & Advocacy—Human Resources would handle any complaints that involved faculty or staff.

“I think it says a lot about NKU that they decided this is something we want to be a standalone office, somewhere that’s going to focus specifically on Title IX issues,” Zippin said.
Where NKU stands
The 6th Circuit Court of Appeals has jurisdiction over Kentucky, Michigan, Ohio and Tennessee, but their rulings set the precedent for future cases, not new laws or regulations. This means the court could reference “Doe v. Baum” as setting a certain expectation and that cases similar to it should follow suit.

The current proposal from the Department of Education bolsters the defenses of an accused person. DeVos wrote that, “It is our goal with this proposed rule to ensure that Title IX grievance proceedings become more transparent, consistent and reliable in their processes and outcomes.”

These changes are still in the works and recipients of federal funding from the Department of Education have not had to make any changes. Anything filed with the offices of Title IX or University Police will only be investigated if the survivor/accuser wants to move forward with it.

“One of the ways we get lost sometimes, is that, it’s very important that these processes are victim-centric or victim-centered,” said University Police Chief John Gaffin. “Forcing someone who doesn’t want to pursue an outcome in the justice system to do so just because it makes us feel better… that’s not the right response for everybody.”

The proposed changes would also allow universities to choose between the evidentiary standard used, a choice between a “preponderance of evidence” or “clear and convincing.” According to Cornell Law School, preponderance of evidence favors the side that can prove they are more than 50 percent true. The current expectations under Title IX is clear and convincing, which requires either party to provide evidence beyond a reasonable doubt.

“I look at the proposed changes as baseline guidelines, I don’t think NKU is going to change what we’re doing,” said Dr. Ande Durojaiye, vice provost for undergraduate affairs and interim Title IX coordinator. “We’re not going to change our commitment to making sure that we adjudicate and investigate any sort of complaint of sexual misconduct that impacts our students.”

What should you do if you’re a victim of sexual misconduct or discrimination?

“I think it’s always a good idea for folks to report to us, and I think that the thing that gets lost is that even when you report to us you still maintain control over that process,” Gaffin said. “We’re not going to prosecute this, we’re not going to move forward with this without your cooperation. You maintain control over what happens or doesn’t happen.”

Zippin suggested doing the same with the offices of Title IX, if it is related to the university or people who are affiliated to NKU—students, faculty or staff—on campus or campus-affiliated buildings.

If you are experiencing an emergency, or if there is an imminent risk to your well-being or that of another person, contact NKU Police at (859) 572-7777 (on campus) or call 911 (off-campus).

Support for student survivors and their allies is available through the Norse Violence Prevention office. For more information about NVP services, please visit nvp.nku.edu. Faculty and staff support is also available by contacting NKU’s Director of Employee Relations at 859-572-7600.