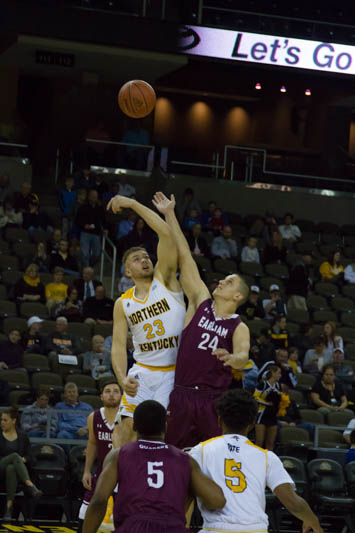 The NKU men’s basketball team began their 2016-2017 season on Friday night with a 96-56 victory over Earlham. The Norse were led by redshirt sophomore Jeff Garrett, who recorded a double-double on 12 points, and 14 rebounds.

“Coach said during the game, don’t worry about the scoreboard. Worry more about working together,” Garrett said. “For me, after not being able to play two years, it feels great.”

The Norse shot 63 percent or the night, including shooting a torrid 75 percent in the second half. The Norse also controlled the paint all night, scoring 62 points down low while only holding Earlham to 18 points in the paint.

NKU never trailed the Quakers, despite only having a 19-14 lead with 11 minutes left in the first half. At halftime though, NKU led 48-22.

The Norse led by as much as 42 points in the second half.

“It was good to get back out there for our first regular season game. I really appreciate our faithful crowd coming out,” head coach John Brannen said. “I thought we had some jitters early, but we settled into our style of play and went on a run.”

“Drew is huge for us because he understands what we want to do, knows how to communicate, and he has competitive credibility,” Brannen said. “Carson is just a guy that is going to continue to get better. His athleticism and toughness around the basket is really going to help us going forward.”

In the second half, senior guard Cole Murray moved into a tie for tenth with Tony Rack on the NKU all-time three point field goals made list, with his 160th made three pointer of his career.

NKU’s next game will be Sunday, November 13 on the road against Illinois at 6 p.m. ET.