Campus freezes over for a good cause 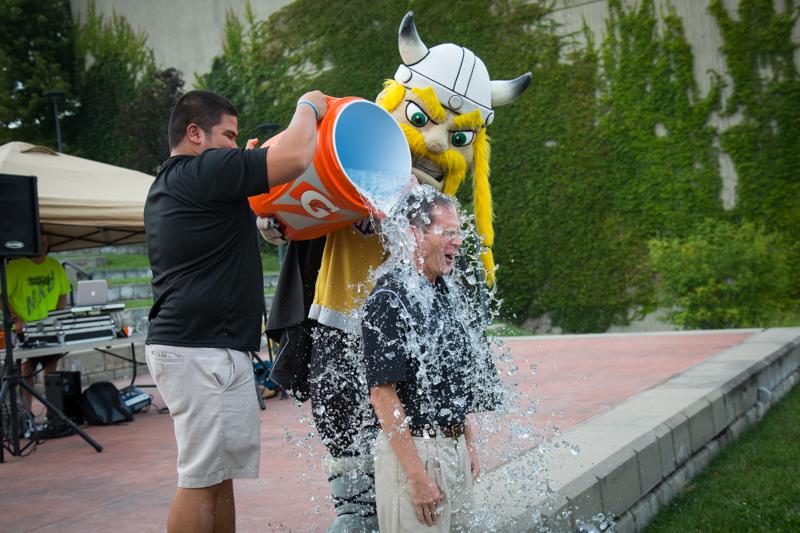 From Chris Pratt, to Justin Timberlake,all the way to President Mearns, many across the nation now have something in common. They have all soaked themselves with ice cold water to support this year’s breakout cause, ALS.

Making its debut in late July, the ALS Ice Bucket Challenge now amasses the majority of everyone’s Facebook timeline, featuring videos of friends and celebrities alike pouring ice water over their heads, challenging the next person.

With the phenomenon spreading across the country and throughout the world, it was only a matter of time before it made its way to NKU.

All those accepting the challenge coming from other teams, daughters and basketball players, all said they didn’t mind, as it was for a good cause.

“Anytime you can make anybody aware of anything that people need help in, I think it’s good,” Basalyga said.

Making people aware of ALS is only one of the benefits of the Ice Bucket Challenge.

According to a New York Times article, the videos that started going viral less than a month ago have raised nearly $42 million from July 29 to Aug. 21, more than doubling their total donations from the previous year.

“I think that it’s one of those things for whatever reason just takes off. It opens your eyes to something you hadn’t thought about,” Bezold said. “It’s a neat thing to do and then to be able to talk about it.”

And talk about it people do. The Challenge has overnight become the latest trend, bringing people together all across the globe, no matter how much or little they have in common.

“It has turned out to be an extraordinary campaign that has raised awareness for ALS all across the country and all around the world,” Mearns said, who participated in the event at this year’s Fresh Fusion.

“This was also an opportunity as a campus community to not only make a statement about that particular disease, but also about how a university community comes together to support each other and to support others who need our help.”

To donate to ALS research go to als.org.