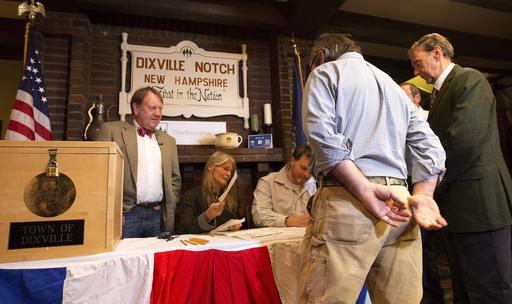 Christina A. Cassidy, The Associated Press

WASHINGTON (AP) — Despite Donald Trump’s continued skepticism that the election was on the up and up, few voters who went to the polls Tuesday encountered problems — and even then, most issues involved the usual machine breakdowns and long lines.

The run-up to the vote was fraught, with unsupported claims by the Republican presidential candidate of a rigged election and fears that hackers might attack voting systems. He reiterated his claims on Election Day, after his campaign announced it was seeking an investigation in the battleground state of Nevada over reports that some early voting locations had allowed people to join lines to vote after polls were scheduled to close.

Asked on Fox News if he would accept Tuesday’s results, Trump continued to demur.

“We’re going to see how things play out today and hopefully they will play out well and hopefully we won’t have to worry about it,” Trump said. Later in the interview, he said, “it’s largely a rigged system.”

Concerns of voter intimidation and fraud led to a flurry of lawsuits in the run-up to Election Day, and new voter regulations in more than a dozen states also held the potential to sow confusion at polling places.

But at least in the early going, most of the problems were routine — the kinds of snags that come every four years, like the lines, machines not working properly, and issues with ballots or voter rolls. One New Jersey voter reported waiting three hours because there were too few voting machines at her polling place in Jersey City.

In Texas, a computer used by election clerks malfunctioned at a polling place inside a high school in suburban Houston, forcing officials to briefly divert voters to another polling place more than two miles away. Fort Bend County Elections Administrator John Oldham said the malfunctioning console was later replaced with a backup and voting resumed.

Andrea Patience, a 50-year-old pharmacy technician, was among those standing in line when the computer malfunctioned. She said she waited an hour for it to be fixed. Patience said as many as 100 people were standing in line at the time, and about half of them left.

“There were a lot of upset people,” Patience said. “I don’t know if they will come back later or decide not to vote.”

Election officials in Utah said voting machine problems in the southern part of the state forced poll workers early in the day to use paper ballots. A computer problem in Durham County, North Carolina — a Democratic stronghold in a state that has been a key battleground in the presidential race — triggered long lines when election officials had to rely on a paper check-in process.

There were also sporadic reports of people in North Carolina who said they were not put on the voter rolls despite registering to vote through the Division of Motor Vehicles.

The question this year was whether problems would be widespread and indicate a pattern of fraud or voter intimidation.

Trump had suggested that Philadelphia was among those places ripe for voter fraud. The city’s district attorney, Seth Williams, said in mid-afternoon that his office had investigated 68 complaints about voter intimidation, broken machines or other problems, a number consistent with the past three presidential elections. He said all had proven unfounded.

In the last week alone, Democrats went to court in seven states seeking to halt what they claim were efforts by Republicans and the Trump campaign to deploy a network of poll watchers hunting for voter fraud. Republicans have disputed claims they are planning to intimidate voters, and judges largely found no evidence of efforts to suppress voters.

While there were concerns that the heated rhetoric of the campaign would lead to confrontations at the polls, only a few minor skirmishes were reported. In southeastern Michigan, authorities said an argument outside a polling place between a woman supporting presidential candidate Hillary Clinton and another backing Trump led a man to shove one of the women and spurred others to join in. No arrests were made.

This is the first presidential election in which a key enforcement provision of the Voting Rights Act was not in place. A 2013 U.S. Supreme Court decision struck down a portion of the law that had required certain states and jurisdictions with a history of discrimination to receive pre-approval from the U.S. Department of Justice for any election law change. This allowed a number of states, most led by Republican legislatures and governors, to enact strict voter ID laws and reduce early voting.

Legal challenges to some of those voter ID laws have led to a multitude of court rulings in recent months that blocked or struck down some provisions while upholding or reinstating others. That triggered concerns of misinformation among voters, election officials and poll workers.

The Supreme Court ruling also prompted the Justice Department to send fewer trained election observers to polling places around the country than in previous years, with the reduction likely to diminish the department’s ability to detect voter intimidation and other potential problems.

Meanwhile, state election officials were guarding against any attempt to breach their systems. Previously, some 33 states accepted an offer from the federal government to check their voter databases and reporting systems for vulnerabilities after hackers attempted to access systems in two states over the summer.