The Latest: Cubans say they prefer Clinton in US election 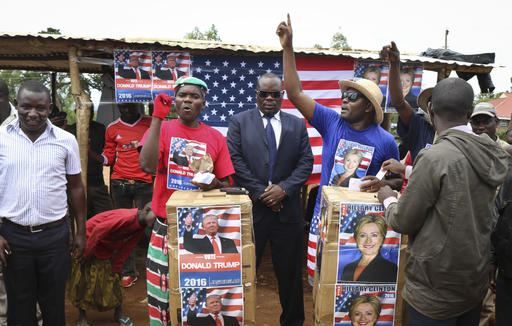 Comedians stage a mock election in the village of Kogelo, the home town of Sarah Obama, step-grandmother of President Barack Obama, in western Kenya, Tuesday, Nov. 8, 2016. Residents of the town made famous by its association with President Obama cast their "votes" for either Hillary Clinton or Donald Trump, with Clinton winning according to an organizer. (AP Photo)

MEXICO CITY (AP) — The Latest on world reaction to the U.S. election (all times EST):

Few countries have more riding on the U.S. election than Cuba. Republican candidate Donald Trump has promised to reverse Barack Obama’s normalization of relations with the communist-run island. Clinton has pledged to continue the process. Normalization with the U.S. is almost universally popular in Cuba, where people said they were rooting for Clinton and a future of better relations.

“We have to respect whatever decision Trump would take but we don’t want him to be president,” Havana resident Lina Osorio said. “We need relations between the two countries.”

Fellow Havana resident Rangel Galindo said simply: “I want it to be her, not him.”

Argentine Foreign Minister Susana Malcorra says a win by Republican Donald Trump in the U.S. election would stall recent moves to improve relations between the countries.

Malcorra told Argentine television channel Todo Noticias that the conservative government of President Maurico Macri had opened a new phase of cooperation and trade with Washington after years of strained relations under former President Cristina Fernandez.

But she said Monday night that there might be a “big stop” in this process if Trump wins, and “depending on the results, there might be big changes” in U.S.-Argentine relations.

The Argentine foreign minister said the “more closed, isolationist and xenophobic” model represented by the Republican candidate would have a major impact on the world and relations with Latin America.

Germany’s foreign minister says the bitter U.S. election campaign will leave a “difficult legacy” for the next president because it has deepened the country’s divisions.

Foreign Minister Frank-Walter Steinmeier says both Germans and many Americans “are glad that this special election campaign is coming to an end.”

He says the campaign “has left a more or less divided country” and it will be difficult for the incoming president to bridge the differences.

Steinmeier has been sharply critical of Republican contender Donald Trump. He brushed aside suggestions that relations between Europe and the U.S. would also become more complicated under Democratic candidate Hillary Clinton — saying that he knows Clinton and doesn’t fear that.

He spoke in Berlin on Tuesday.

Kenyans in President Barack Obama’s ancestral hometown have held their own version of the U.S. presidential election, leaning heavily toward Obama’s own favorite in the race: Hillary Clinton.

Tuesday’s mock poll was held in Nyangoma-Kogelo, the birthplace of Obama’s father. Kenyan comedian Laurence Oyange was an organizer. He says it’s a way Kenyans can connect to America.

Oyange said the poll was boycotted by Malik Obama, the president’s half-brother who has said he supports Trump.

There were 105 voters and 78 percent of them favored Clinton. Eleven percent went for Donald Trump. Other ballots were spoiled or disqualified.

Renzi pointed to U.S. job creation, investment in energy and health care as some of Obama’s domestic victories. Renzi cited the Cuba detente and the Iran nuclear deal as international achievements for the Obama administration.

Renzi is the leader of Italy’s Democratic Party and has said he hopes Hillary Clinton wins.

Renzi writes that Obama will continue “to be a source of inspiration and encounter for the new generation.”

German Chancellor Angela Merkel says a victory for Hillary Clinton in the U.S. presidential election would be a step toward gender balance among world leaders.

Merkel says she’s awaiting the election result “with suspense,” while declining to comment directly on Clinton or rival Donald Trump.

But asked Tuesday about the possibility of a woman winning the White House, she said: “Then we’d come a little bit closer to a balance of women and men in leading positions.”

Germany’s first female leader was speaking alongside Erna Solberg, Norway’s second female prime minister. Solberg said it “may be inspiring for many young women to see politics not just as something that belongs to men.”

But she added: “There isn’t some kind of global girlfriends network that wants to rule the world.”

Poland’s foreign minister says Eastern Europe is closely watching the U.S. elections but will reserve judgment on who would be a better president.

Witold Waszczykowski declined to say whether Hillary Clinton or Donald Trump would better serve the region’s security and political interests.

He says a future U.S. president would be judged after selecting “prominent figures to run foreign policy and the military sector.”

Waszczykowski says he doesn’t think the words and ideas expressed during the campaign are necessarily “a guide for a future president.”