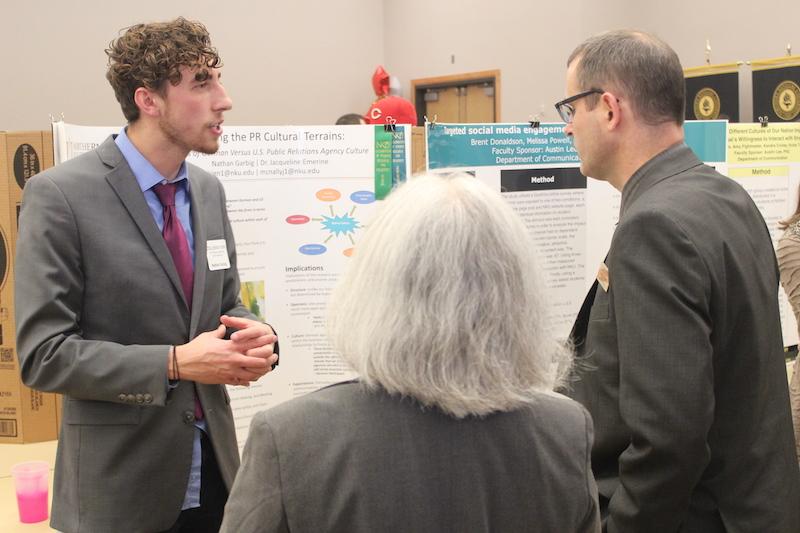 Nathan Garbig discusses his poster at the Celebration Festival with Zach Hart, co-chair of the event.

Nathan Garbig interned in Germany this past summer at a PR firm. While he was there he conducted research on how business in Germany is very structured and much more hierarchical.

Garbig said Germany is a more strict environment compared to the laid-back environment in the U.S.

“I wanted to compare and contrast these differences and see if that really was the case,” Garbig said.

Garbig was studying abroad for two months from June to August and he didn’t speak German, which made it difficult to communicate with others and it proved to be difficult to try and recruit participants. The gap between the two languages left some people confused and questions were misunderstood.

“If I could go back and do it again, I would wish that I had a German language background or better at being able to communicate,” said Garbig.

Germans tend to show credibility through their appearance . In addition, Germans would always address their clients, fellow employees or employers with Herr (Mr.) or Frau (Mrs.), no matter how long that relationship has been built, according to Garbig.

They also like to keep their personal life outside of the office. Garbig addressed some of these differences.

“I really like the aspects of formality and different dress codes, different formality in the business codes, looking into the internal structural culture; that’s something that I found most engaging to me and just very interesting,” Garbig said.