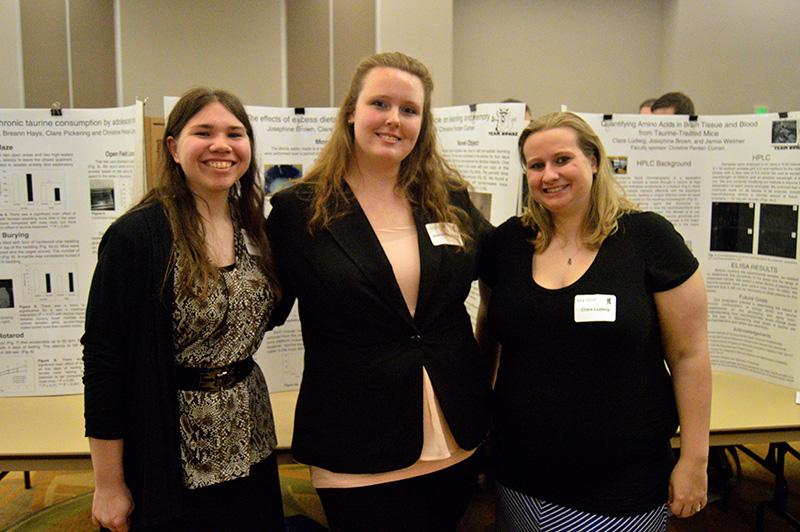 Biological science students (from left to right) Jamie Weimer, Josephine Brown and Clare Ludwig stand in front of their poster presentation at NKU's Celebration on Wednesday. The three studied the effects of the chemical taurine on adolescent mice.

According to Jamie Weimer, a biological science major, the amino acid taurine is found in high concentrations in energy drinks.

“The Mayo Clinic recommends no more than 3,000 milligrams per day, but a lot of the major energy drinks have 1,000 milligrams,” Weimer said. “But taurine is also found in meat and cheese as well, so it would be really easy to go over that limit.

Josephine Brown, a major in cellular/molecular genetics, said because energy drinks are advertised to male adolescents, they chose to conduct the study on mice in this age group.

“Energy drinks are specifically targeted toward adolescent males in particular, and here we looked at taurine exposure in the mice during an adolescent period in development,” Brown said.

Mice were administered taurine over the course of thirty days. The students stopped treatment and examined the anxiety, motor functions, hyperactivity and spatial and non-spatial learning of the mice.

Clare Ludwig, a cellular/molecular genetics major, used high-performance liquid chromatography to study the effects of taurine in the brain tissue of the mice.