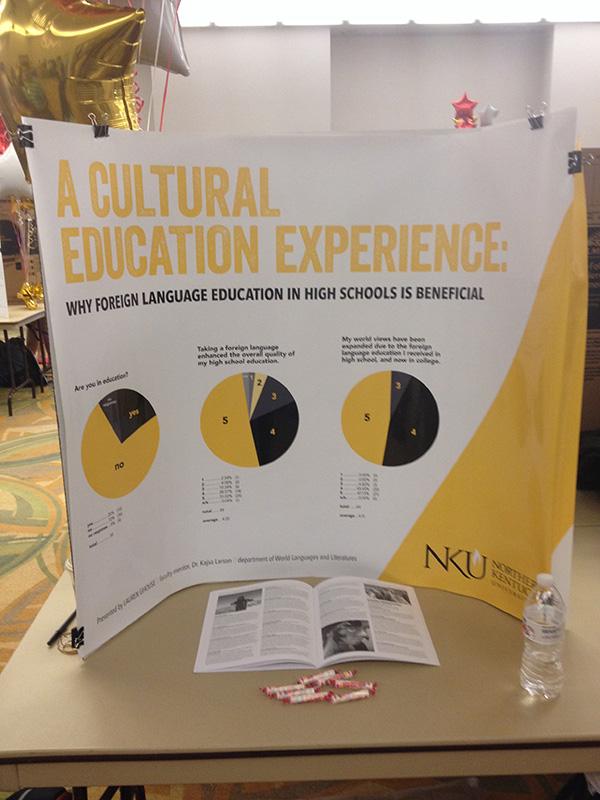 Spanish major, Lauren Ghouse, believes that high-schools offering students computer coding as an alternative for learning a second language, will put them at a disadvantage for future jobs.

“People who are efficient in either one to four languages will have access to better job opportunities and greater salaries,” Ghouse said as she presented her poster at Celebration this week.

According to the Economist.com, a person who is efficient in another language can earn up to $600 more than their co-workers who aren’t.

Not only does being proficient in another language increase job opportunities but it can also help executive function in children.

The Economist.com states that, bilingual children as young as seven months outperform monolinguals at tasks requiring “executive function”: prioritizing and planning complex tasks and switching mental gears. The website believes that it is probably because monitoring the use of two languages is itself an exercise in executive function.

Students at NKU also believe that learning a second language is beneficial. Out of 50 students who participated in the survey conducted by Ghouse, more that 70 percent agreed that high-schools should offer a second language to students over computer coding classes.

“Imagine how much more understanding people would be of other cultures if we knew one or more languages other than our own,” Ghouse said. “The earlier we learn them, the better we pick it up later on.”