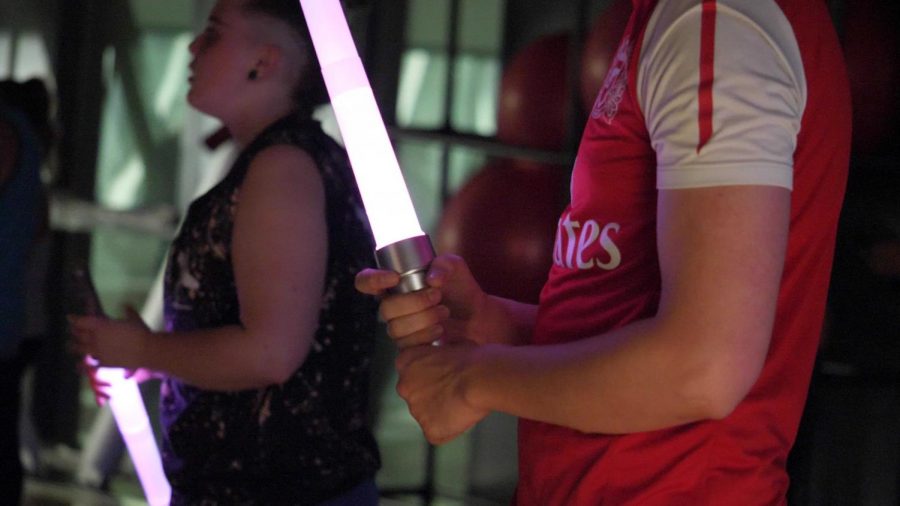 Around 30 people attended a Jedi Training event Tuesday night in the Campus Recreation Center, which combined a Pilates workout with glowing lightsabers from the ‘Star Wars’ series. The event was hosted by the Institute for Health Innovation as part of their “Geek Your Health” project.

The idea behind Geek Your Health is to encourage people who wouldn’t normally have an interest in working out to engage in healthy activities centered around a specific pop culture theme, according to the IHI. This was the second time the Campus Recreation Center held the Jedi Training event—the previous session was in August at RecFest.

Kat Glaser, fitness intern at the Campus Recreation Center, has hosted both Jedi Training sessions. Glaser planned the sessions by looking at Jedi-themed workout ideas online, in addition to the Nerd Fitness website.

“I don’t consider myself a nerd for Star Wars or other things that other people might consider nerdy, but [Nerd Fitness has] led a nationwide movement of getting people from different demographics into the gym who normally wouldn’t necessarily do it because they’re basing their workouts and calling them things like Jedi Training or the Superman workout,” Glaser said.

The entire workout session was performed with the lights off, the lightsabers glowing a variety of colors in the darkened room as Glaser played Star Wars music on her phone in the background. As part of the Star Wars theme, Glaser compared each part of the workout to one of the three ‘Pillars of Jedi Strength:’ The Force, knowledge and self-discipline.

Combining geek elements with fitness seemed to pay off for students like Brenden Davis, who attended the session because he’s both a Star Wars fan and someone who wanted to find a new way to work out.

“If you can combine something as fun as Star Wars with a workout, you don’t get much better experience. The instructor put an awesome lesson plan together, and made it fun at the same time,” Davis said.

First, Glaser led attendees through stretches and breathing exercises as a warmup.

“The most important thing you can do as a Jedi and for yourself is to breathe,” Glaser told the Jedi in training.

For the majority of the workout, Glaser used the lightsabers in some way, from practicing swinging the lightsabers to lifting them above their heads while doing squats. During the squats, some attendees shouted encouragement such as “Do it for baby Yoda!”

At the end of the workout session, Glaser led everyone in a brief meditation. After the five minute meditation, she closed the training with a familiar Jedi saying.

“May the Force be with you,” Glaser said to the attendees, and received a chorus of “And also with you,” in response.