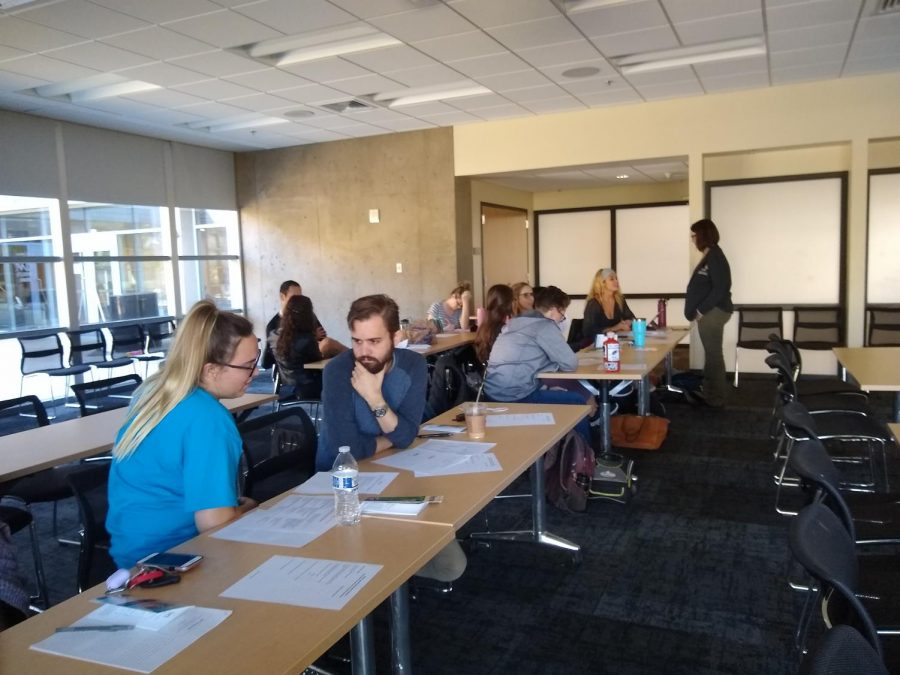 A dozen students gathered in SU 109 Tuesday afternoon for QPR training as part of mental health week on campus. QPR stands for Question, Persuade, Refer, and is an informational program that lays the groundwork for recognizing warning signs and preventing suicide.

The program was presented by Christy Wolfram, a counselor in the Health, Counseling and Student Wellness office, and tackled the myths and facts of suicide, as well as offering real world situations and solutions when the attendees may encounter someone struggling with suicidal thoughts.

The first part of QPR is “Question,” referring to the very difficult task of asking someone “Are you thinking about killing yourself?” Wolfram explained during the presentation that talking openly about suicide is more helpful to preventing it, and that, excluding young children, it’s impossible to put the idea of suicide into someone’s head.

When asking someone if they are having suicidal thoughts, the idea to commit suicide would already be present, and asking will not suddenly implant the idea of suicide in someone’s head.

People going through sudden changes, such as the death of a loved one, coming out as LGBTQ+, or being diagnosed with a terminal illness are also susceptible to suicidal thoughts, so it’s important to check up on those who are experiencing a sudden major life change.

Wolfram acknowledged it can be difficult to tell when someone is serious about suicide or just making jokes, as it’s become common practice in society to make offhand comments about killing oneself or wanting to die if things don’t go our way.

“It can be really hard to take some of these seriously; it can feel like a joke or be really uncomfortable if someone is like ‘I’m going to kill myself if I don’t pass this class.’ It can be so hard to be like, ‘oh, yeah, they’re serious!’” Wolfram said.

The best advice she had for times when it’s uncertain if someone is joking is to take every comment seriously. As a counselor, Wolfram said she asks each of her clients during their sessions if they’ve been having any suicidal thoughts, or thoughts of self-harm. From there, she can further assess the level of danger and offer alternative solutions to both their problems and ways of expressing their frustration.

The second part of QPR is “Persuade,” which is the next crucial step if someone admits to having suicidal thoughts. Persuade focuses on persuading a suicidal person to keep living and trying to help in the short term before getting them any advanced professional help.

Wolfram said that bringing up the importance of your relationship with the person can offer a reason for them to keep living, and working with them to find solutions to the problems making them feel suicidal can inspire hope and keep them alive.

The “Refer” in QPR follows up on “Persuade,” and encourages those with QPR training to refer those struggling with suicidal thoughts to go to a counselor, hospital or other mental health professional who can offer the assistance they need. Most importantly with referral, those with QPR training are not necessarily mental health professionals and need to recognize when to seek outside help.

Wolfram offered the students in attendance scenarios to roleplay for practice of real-world experiences in seeing warning signs of suicidal thoughts and putting their QPR training into practice. The first scenario was of a professor whose student received an “F” on a recent exam, and the second was for someone who had been recently diagnosed with pulmonary fibrosis at a checkup with their respiratory therapist.

Sean Grever, Destiny Rosenberg and Mary Nedderman, all graduate students in the school counseling field, attended the seminar as part of a requirement for class, and worked together to discuss the role play scenarios given to them and how they would handle the situation.

Grever said they heard about the QPR training through the Columbine Shooter panel that was mentioned in their class, and Rosenberg looked on the website for other mental health week events to attend. For them, the program offered a great insight into situations they may face in their future careers, as well as how to handle those scenarios.

QPR training is available for anyone on campus, and is offered approximately three times a semester. Wolfram said what she’d most like to see as a result of more QPR training is more open dialogue about suicide and offering support to those with suicidal thoughts.

As part of the training, a video Wolfram showed stated that suicidal thoughts are present all over the world, and millions of Americans suffer from suicidal thoughts every year. Because of that, it’s important to offer QPR training to prevent as many suicides as possible.