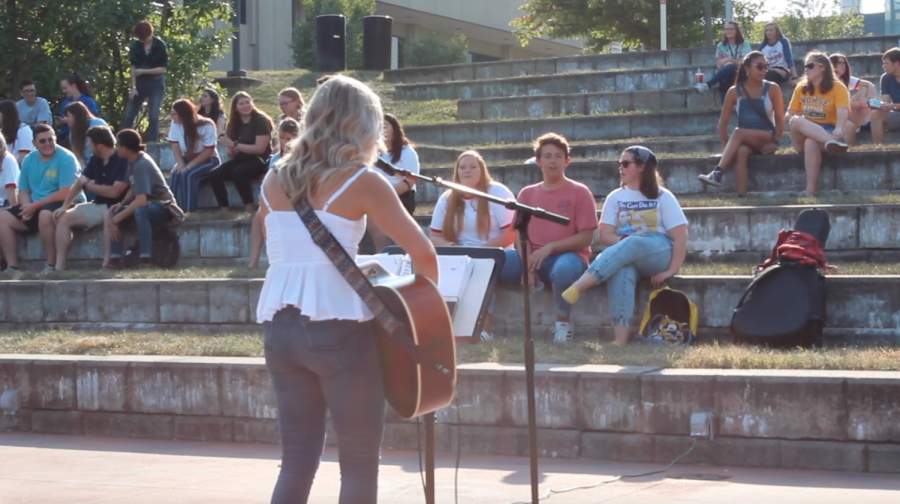 The sun blazed down on the Loch Norse amphitheater Friday afternoon as students lazed on the lawn to watch the first performance of Bonnamu, a campus music festival held by sorority Phi Mu. Soft guitar covers echoed through the Student Union plaza as curious onlookers paused on sidewalks to watch the event while girls in red and white “Bonnamu” t-shirts finished last-minute details of the second annual Bonnamu.

Bonnamu, which is a play on words of the internationally famous festival Bonnaroo, is an annual Phi Mu fundraising event to support the Children’s Miracle Network. This year, the proceeds were donated to Cincinnati Children’s Hospital.

In true music festival fashion, Bonnamu featured artists in several diverse genres ranging from singer-songwriter and a capella to punk and indie pop. Plenty of photo ops were available for festival goers, and with the event occurring during the golden hour, the atmosphere was glowing. Games like cornhole, giant jenga and giant connect four were also set up. For animal lovers, two dogs could be seen trailing around the festival finding willing people to pet them.

Of the six artists contacted to play Bonnamu, all were able to attend. The lineup included NKU based artists, like Lost Henry and Nichole Bezold—who played the Big Event in August—Evan Rogers, and Tonality, NKU’s only a capella group, directed by Phi Mu’s own Madison Boler. Indie pop band Campus Rex and punk rock band Big Smile also performed.

“A lot of sisters knew performers because we had a lot of friends in the SOTA building,” Manley said. “Some of our performers were people who went to NKU. And then other times, our performers suggested another band and so we would contact them.”

While it is a much smaller festival compared to its namesake, Bonnamu was a first outdoor festival experience for some.

Colton McCloy, senior data science and statistics major, heard about Bonnamu through a friend who helped plan it.

“I have been to indoor music festivals. I haven’t been to outdoor stuff,” McCloy said. “It’s a little bit different, feel-wise.”

As a musician himself, McCloy was excited to see what Bonnamu was like despite not knowing much about the performers.

“Just based on names, I saw the shirt and I saw someone called Campus Rex is coming. And I thought like baby T-rex. So I’m excited,” McCloy said.

Sophomore Gabrielle Manley, Phi Mu’s philanthropy chair, planned this year’s Bonnamu with the help and support of her Phi Mu sisters, who supported her when she struggled or was worried about how much people would enjoy the festival.

Manley’s goal was to raise $2,500. Although she wants to reach $5,000, she recognizes that, as attendees will most likely be broke college students, that may be unattainable.

Tickets for Bonnamu were $5 in advance and $7 at the door. Other fundraising opportunities included raffle baskets full of diverse gifts, including assorted Starbucks merch, laundry essentials, Bonnamu t-shirts and concessions.

Scooter Smith, lead singer of both Campus Rex and Big Smile, said he was looking forward to playing Bonnamu because it was the first outdoor show he had played.

“Everything is unique about every place we go. We’ve never played outside before,” Smith said. “That’s one thing that we’ll get here that we’ve never had before.”

Campus Rex is comprised of Smith and University of Cincinnati students Andrew Ebding, Keegan Kile and Noah Jatczak, with guitarist Griffin King joining them for the first time.

Smith was most excited to cover The Killers’ song “Smile Like You Mean It” with Campus Rex and perform Big Smile’s original song “Oscillate.” Kile was eager for Campus Rex to cover “Chocolate” by the 1975.

Although each artist brought their A game to the festival, standouts Lost Henry, Campus Rex and Big Smile were able to spread an infectious energy that had some festivalgoers dancing and singing along despite the nearly 90-degree heat.

“I want to send a shoutout to all the dogs that were here tonight,” Big Smile’s bassist, John Morris, said.