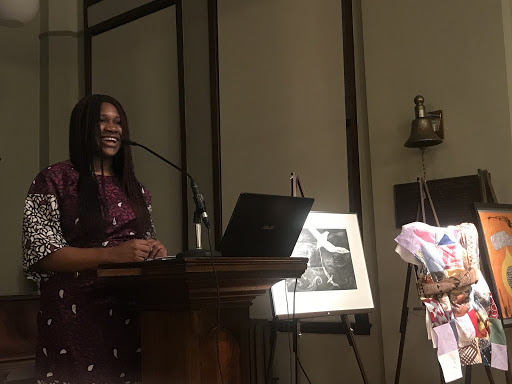 Onyinye Uwolloh speaks on "Ishmael na my Name", her sequence of haiku in Pidgin English based on Herman Melville's Moby Dick.

Tremendous things happen when you step away from the safe and familiar. The interdisciplinary format of the honors college encourages students to think beyond their majors, a test that can lead to great discoveries.

NKU Scripps Howard Center for Civic Engagement hosted Moby Dick through a Nigerian Lens as part of their Six@Six lecture series at the Mercantile Library in Cincinnati, Ohio.

Dr. Bob Wallace, an internationally known Melville scholar and English Professor at NKU, led the discussion along with his student Onyinye Uwolloh.

What is unique about this particular series is the inclusion of undergraduate student research.

“I began to see that there is a tremendous amount of amazing research done by our undergraduate students.” said Mark Neikirk, Executive Director of Scripps Howard Center for Civic Engagement. “We really wanted to showcase that by bringing students into this series.”

Displayed in various locations in the room were works of art created in response to Melville’s writing; most of which were created by former NKU students in Wallace’s course Moby Dick and the Arts, which was offered through the honors program, now known as the honors college.

Together they explored Moby Dick through Ishmael na my Name—the sequence of haiku in the Pidgin English of Nigeria, Uwolloh’s native country— that she created as her final project for the class in the spring 2018 semester.

“After reading her artist statement, I realized that Pidgin English was essentially the common language that people from all over the world on whale ships spoke in the 19th century,” said Wallace.

This realization lead to an extension of this project into an independent study during the summer session. During this period, Uwolloh read “Benito Cereno,” Melville’s story about an African slave revolt on a Spanish ship.

In this presentation, Uwolloh explored “Benito Cereno” from her Nigerian perspective; enriched by the most recent historical, literary, and artistic interpretations of that story.

On that ship, there were African slaves from different tribes and countries. According to Uwolloh, in order to facilitate the revolt, they must have spoken some sort of pidgin language. This discovery offered a new perspective for the importance of her decision to write her haiku series in Pidgin English.

This presentation provided new insights into the value of the stories Melville wrote in the 1850s for the global, post-colonial world of the early 21st century.

It has been recently confirmed that Uwolloh’s series of Haiku will be published in an anthology of poems centered around Melville. She has also been invited to a conference in New York City to celebrate the 200th anniversary of Melville’s birthday and the works of art that have derived from his literature.

Uwolloh is a psychology major, with no background in creative writing or poetry. She hopes that students can look at her work and feel inspired to step out of their comfort zone.

“I felt inspired because I saw what Dr. Wallace’s students in past classes had done,” said Uwolloh. “Most of those students were not art majors. I realized you don’t have to be one to create art.”