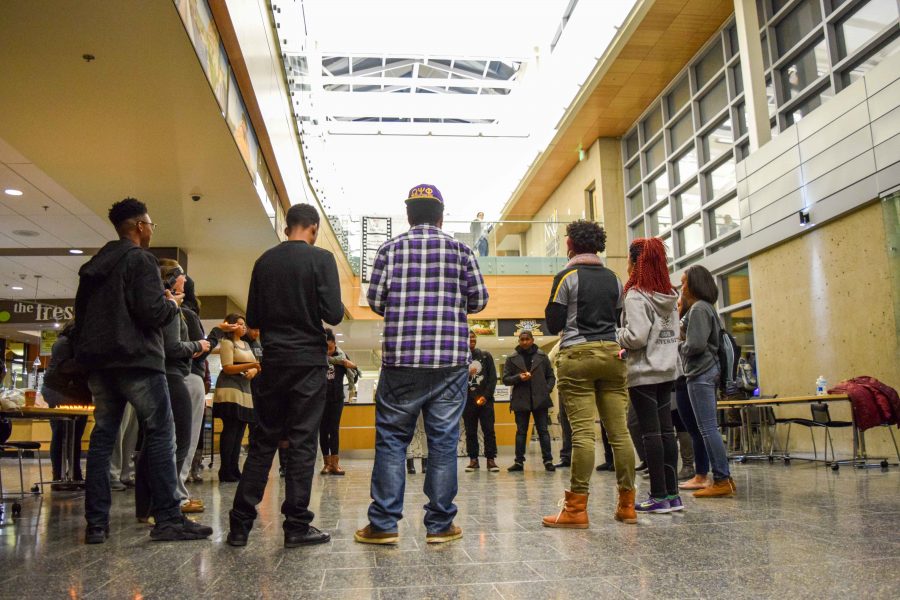 Students gathered in a circle and held flameless candles while singing “This Little Light of Mine.” They spoke in honor of Dr. Martin Luther King Jr. on Tuesday night in the SU lobby.

The Candlelight Vigil was held by the African American Programs & Services (AAP&S) and Alpha Phi Alpha; In partnership, they launched MLK Commemoration Week at NKU.

James Johnson, president of Alpha Phi Alpha Fraternity, said he’s glad that his peers were able to come out.

“Most of the people here are very involved within AAP&S,” Johnson said.“I’m very satisfied with the turnout, but with each event every year we have to build on it.”

In addition to commemorating Dr. King in the lobby, the group marched around the plaza on campus despite the wind blowing powerfully. Students were asked to take a moment of silence in his honor.

“I know we would never be able to make up all of the miles that he walked in his shoes,” Johnson said. “But if we can just sacrifice a little part of our day and withstand the cold, as long as we do that in remembrance of him, we’re paying homage to his legacy and his work.”

During the vigil, Johnson, a main speaker, spoke on King’s perseverance and how it can relate to us as a community.

“And I think that it’s very prominent that Dr. Martin Luther King did dream. We should also be dreaming, we should also have our minds on the bigger picture.”

Students held their candlelights as Tracy Stokes, director of AAP&S at NKU, explained how the event connected to pursuing passions.

“I had you put the light at the top of your hand just because I wanted you to continue to look at it and to always remember that you have to use your passion in order to achieve your purpose,” Stokes said. “Make sure you’re doing what you’re doing because you love to do it.

“Never let anybody blow out your light. Because if you do, you are not being true to who you are.”

Stokes said that it’s important to focus on non-violence and inclusion this week because that’s what MLK stood for.

“I think what he did as far as going the route of peaceful protest and coming together as a community is really important,” Sherman said. “As we celebrate we can see how that can affect everybody in a positive way.”

Johnson also said he hopes the event will inspire the community.

“My expectation is that we really digest his legacy and his work, and what it meant to be a leader in that time,” Johnson said. “And if we can still have that tenacious spirit in 2017, I know that the sky’s the limit. Anything is possible as long as you have that unadulterated fight within us that he had.”