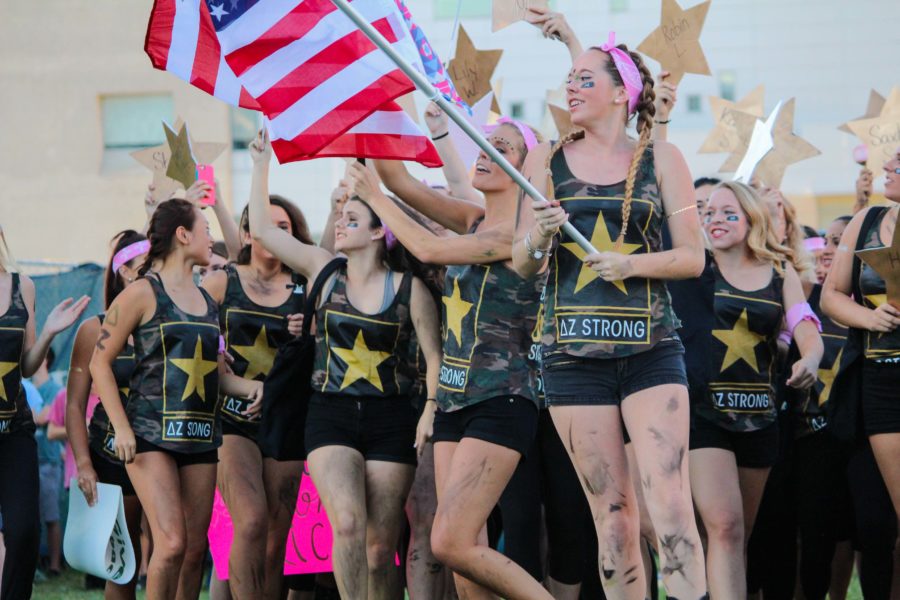 One by one, the new members are released to their chapters and love and tutus engulf the women.

The women sat in rows silently and clutched the envelopes in their clammy palms. Shoes tapped lightly on the ground and some clutched the ends of their hair in a nervous fashion. The envelopes they held so tightly held the note that would invite them to join their new sisterhoods.

Hundreds of women gathered in the Student Union Ballroom to begin their last recruitment meeting before they were given their bids to their sororities on Sept. 11.

Kim Vance broke the silence to explain to the group what they were entering into. Upon joining Greek life there were several issues that would need to be touched on before accepting their bids.

She spoke sternly as she explained that, “hazing is strictly prohibited.” As Vance carried on, the tension in the room slowly rose as the reveal became closer.

When permission is given to open the envelopes, shrills and screams echo through the ballroom.

When opening her bid card to Kappa Delta, Hannah McDavid, a freshman journalism major said, “I felt so much excitement. They were my number one choice.”

Several women jump up in excitement and many run across the room to land in the arms of a fellow sorority member. Lines begin to form of the separate sororities and the students file out into the quad in anticipation to join the active members of their sisterhood.

One by one, the new members are released to their chapters and love and tutus engulf the women.

Over the screaming a man was heard saying, “The only day that women will run as fast as they can into each other.”

After the initial run to their new homes, the sororities separate throughout campus to celebrate accordingly with their new initiates. Shirts are passed out and some sororities give name cards, hats, and even bags with their Greek letters written across the side. Hundreds of pictures are taken near backdrops and in the shirts that the new members have acquired.

With 19 chapters on campus and Phi Mu and Fiji being added this year, NKU averages to having about 12 percent of the student population involved in Greek organizations. Just in the 2015 year, the chapters raised over $127,00 for charitable organizations.  While meeting new people and becoming more involved on campus are part of the Greek life experience, philanthropic events are a major part  of the Greek system as well.  The money raised each year leaves a positive impact on the community surrounding campus.

As the night came to a close the women gathered around their giant Greek letters, saying goodbye to their new sisters. Wearing  their body paint and tutus  they head their separate ways. The new members walked slowly to their cars with  smiles  larger than life. Their new letters are worn proudly across their chests but the most important article they carry is the small envelope that brought 280 women to their new homes.